One may have found that some things can stretch quickly, but stretching an iron rod seems difficult, doesn’t it? This article helps to understand why certain things are more malleable than others. Here topics like stress-strain curves are discussed because they’re useful for determining the tensile strength of a given material. When a deforming force is applied to a body its length decreases, as a result of this the molecules of the body go far apart. As a result of this, the spring is slightly compressed and the intermolecular forces get changed. The restoring forces developed in the spring bring these displaced molecules to their respective equilibrium potions. In other words, the body regains its original shape or length on the al of deforming force. This property of the body is known as elasticity.

Atoms and molecules in a solid are structured in such a manner that neighboring molecules exert a force on each other are known as the intermolecular forces. After the deforming forces are removed, the body returns to its original structure (length, shape, or volume). This is an example of elasticity.

Elasticity is defined as the property of a solid body by virtue of which it regains its original configuration (shape and size) when the external deforming force and on it is removed is called elasticity.

where, σ is the stress applied, F is the force applied and A is the area of force application

The Dimensional formula of stress is [ML-1T-2].

Stress is a scalar quantity i.e. it has only magnitude.

Stress applied to a material can be of five types. They are:

(1) Normal stress: Normal Stress is defined as the restoring force per unit area perpendicular to the surface of the body. It is further of two types: Tensile stress and Compressive stress.

The length of a solid can be changed in two ways: 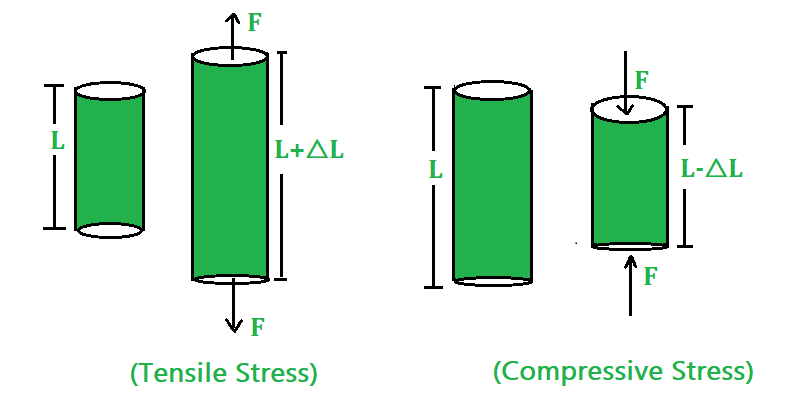 The strain clearly says it as the amount of deformation experienced by the body in the direction of force applied, separated by the original proportions of the body. The relationship for deformation in terms of a solid’s length is given below:

where ϵ is the strain due to stress applied, δl is the change in length and L is the original length of the material.

The strain is a dimensionless quantity as it just defines the relative change in shape.

There are three types of strain:

If △V is the change in volume or V0 – V, where V0 is the original volume and V is the volume of the body under bulk stress.

A negative sign shows that volume decreases when the body is under bulk stress.

(3) Shear Strain: This type of strain is produced when the body is under tangential stress or shearing stress. is defined as the angle (θ) through which the face of a body originally perpendicular to the fixed face is turned when it is under the shearing stress.

Problem 1: A body is under tensile stress, its original length was L m, after applying tensile stress its length become  L/4 m. Calculate the tensile strain applied to the body.

The original length is L m.

Problem 2: A copper wire of length 2.5m has a percentage strain of 0.012 % under a tensile force. Calculate the extension in the wire.

Given that, The original length is 2.5 m

Due to the repeated stress and strain , the material used in bridges loses elastic strength and ultimately may be collapsed. That is why bridges are declared unsafe after long time of use.

Example 5: Write down the cause of restoring stress in a stretched wire compressed wire.