The calls to Stream.concat(stream1, stream2) can be think of as forming a binary tree. The concatenation of all the input streams is at the root. The individual input streams are at the leaves. Below given are some examples of trees upto four input streams a, b, c and d.

For two streams a and b, the tree looks like : 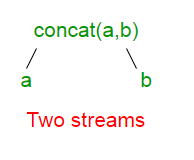 For three streams a, b and c, the tree looks like : 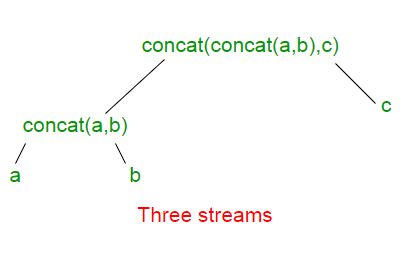 Note : The elements returned by Stream.concat() method is ordered. For example, the following two lines returns the same result:

Below are some examples to understand the implementation of the function in a better way.
Example 1 :