Given how difficult translation may be, it should come as no surprise that the most effective machine translation systems are created by training a probabilistic model with statistics acquired from a vast corpus of text. This method does not need a complicated ontology of interlingua ideas, handcrafted source, and destination language grammars, or a hand-labeled treebank. It just requires data in the form of example translations from which a translation model may be learned. We determine the string of words

To convert a phrase from English (e) to French (f)

The target language model for French is

, which indicates how likely a particular sentence is in French. The translation model,

, indicates how likely an English sentence is to be translated into a particular French sentence. Similarly,

is an English-to-French translation model.
Should we work on

directly, or should we use Bayes’ rule and work on P(e|f)P(f)? It is easier to model the domain in the causal direction in diagnostic applications like medicine:

. However, both approaches are equally simple to translate. The researchers used Bayes’ rule in the early work in statistical machine translation, in part because they had a decent language model,

, and wanted to utilize it, and in part, because they came from a background in voice recognition, which is a diagnostic problem. In this chapter, we follow their path, although we should point out that recent work in statistical machine translation frequently optimizes

directly, employing a more complex model that incorporates many of the language model’s properties. 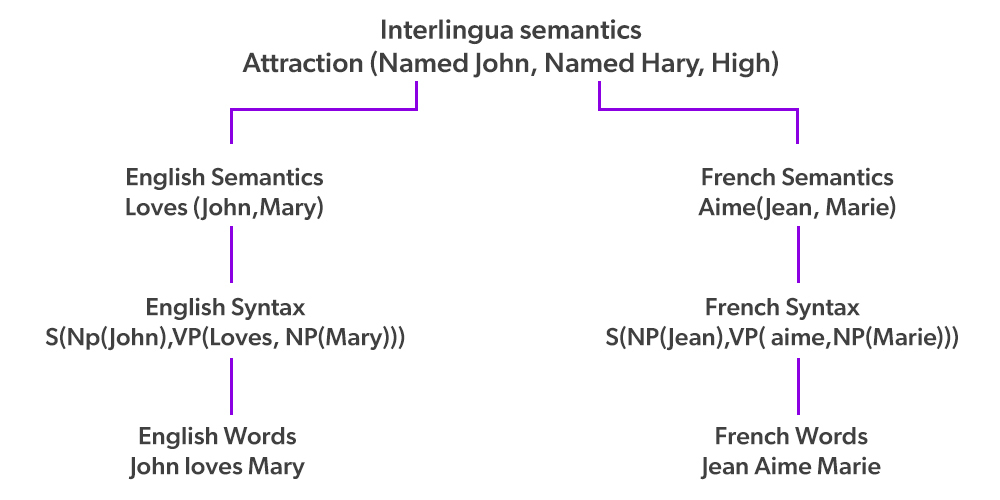 , might address any level(s) on the right-hand side of the figure above, but the simplest and most frequent technique, as we’ve seen before, is to develop an n-gram model from a French corpus. This just catches a partial, local sense of French phrases, but it’s typically enough for a rudimentary translation.

A collection of parallel texts, each with an English/French pair—is used to train the translation model. If we had an endlessly huge corpus, translating a sentence would just be a lookup task: we’d already seen the English sentence in the corpus, so we’d just return the corresponding French sentence. However, our resources are limited, and the majority of the sentences we will be required to translate will be unfamiliar. They will, however, be made up of terms that we have seen previously (even if some phrases are as short as one word). For example, “in this exercise we shall,” “size of the state space,” “as a function of,” and “notes at the conclusion of the chapter” are all prevalent terms in this book. We should be able to break the novel sentence “In this exercise, we will compute the size of the state space as a function of the number of actions.” into phrases, find the corresponding phrases and French phrases in the English corpus and from the French translation respectively, and then reassemble the French phrases into an order that makes sense in French. To put it another way, given an English sentence e, finding a French translation f is a three-step process: 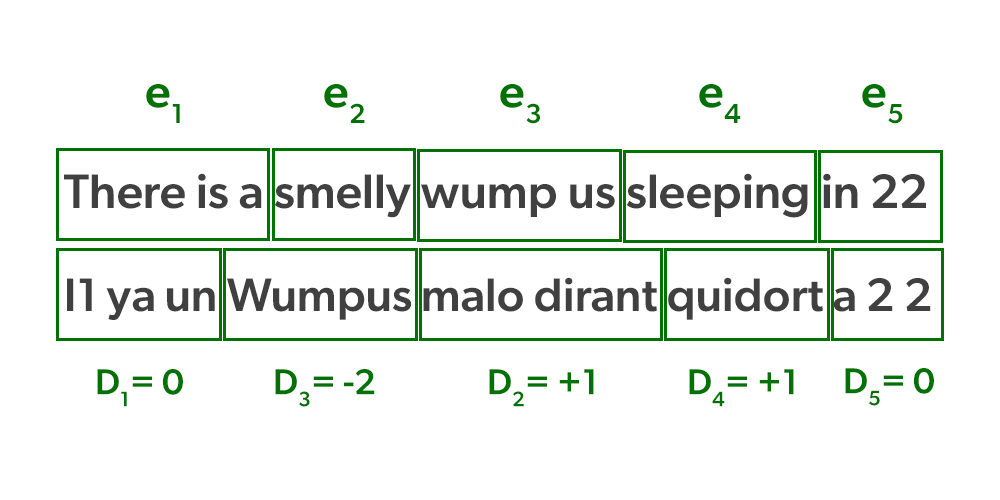 The figure above shows an example of the process explained in the previous article. The line “There is a stinky wumpus sleeping in 2 2″ is broken down into five phrases at the top,

. Each one is translated into a

phrase, which is then permuted into the following order:

. The permutation is defined as

is the ordinal number of the first word of phrase

in the French sentence and

is the ordinal number of the last word of phrase

. The figure above shows that

has shifted one word to the right of f1. We have

as a special case since f1 begins at position 1 and

is specified to be 0. (even though

We can define the probability distribution for distortion,

, now that we’ve established the distortion,

for phrases of length

element, significantly fewer numbers to remember than the number of permutations,

. That is why the permutation was specified in such a convoluted manner. Of course, this is a fairly rudimentary distortion model. When translating from English to French, it doesn’t state that adjectives are frequently altered to appear after the noun—that fact is reflected in the French language model,

. The chance of distortion is unaffected by the words in the sentences, relying simply on the integer value di. The probability distribution summarizes the permutation’s volatility; for example, how often is a distortion of

Now it’s time to put it all together: The probability that the series of words f with distortions d is a translation of the sequence of phrases e may be defined as

. We assume that each phrase translation and distortion is independent of the others, and so the expression may be factored as

This allows us to calculate the probability

for a given candidate translation

. But we can’t merely enumerate sentences to discover the optimal f and d; with about 100 French phrases for every English phrase in the corpus, there are 1005 distinct 5-translations and

reorderings for each of them. We’ll need to look for a decent solution. Finding a nearly-most-probable translation using a local beam search with a heuristic that assesses likelihood has proved to be beneficial.

The only thing left is to figure out the phrasal and distortion probability. We sketch the procedure for further information, read the notes at the conclusion of the chapter