By definition, information residing in the Stable-Storage is never lost. Even, if the disk and CPU have some errors, it will never lose any data.

Stable-Storage Implementation:
To achieve such storage, we need to replicate the required information on multiple storage devices with independent failure modes. The writing of an update should be coordinate in such a way that it would not delete all the copies of the state and when we are recovering from a failure we can force all the copies to a consistent and correct valued even if another failure occurs during the recovery. In this article we will discuss how to cover these needs.

The disk write operation results to one of the following outcome:

During writing a block somehow if failure occurs, the system’s first work is to detect the failure and then invoke a recovery process to restore the consistent state. To do that, the system must contain two physical block for each logical block.

An output operation is executed as follows: 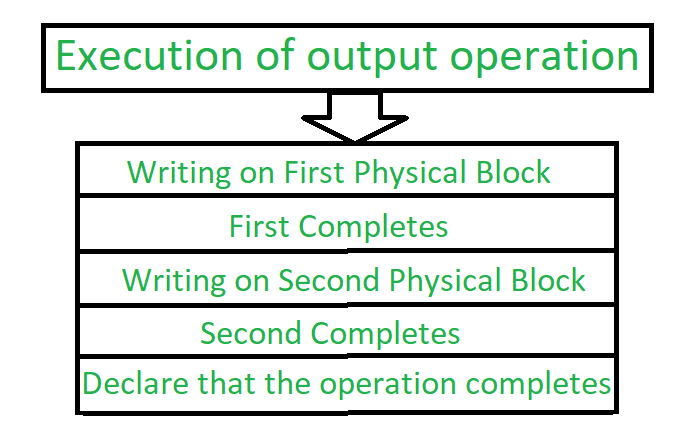 During the recovery from a failure each of the physical block is examined. If both are the same and no detectable error exists, then no further action is necessary. If one block contains detectable errors then we replace its content with the value of the other block. If neither block contains the detectable error, but the block differ in content, then we replace the content of first block with the content of the second block. This procedure of the recovery give us an conclusion that either the write to stable content succeeds successfully or it results in no change.

Because waiting for disk writes to complete is time consuming, many storage arrays add NVRAM as a cache. Since the memory is non-volatile it can be trusted to store the data in route to the disks. In this way it is considered as a part of the stable storage. Writing to the stable storage is much faster than to the disk, so performance is greatly improved.