SSC CGL refers to ‘Staff Selection Commission Combined Graduate Level,’ and ‘Reasoning’ is one of the most critical yet scoring topics asked in the SSC CGL exams. Reasoning is the section that analyses your logical thinking abilities, problem-solving and decision-making skills. However, one cannot master reasoning by the book learning method, and it requires constant and consistent practice.

Following are a few important questions asked in the SSC CGL Prelims exams from this section:

Q1. Four letter clusters have been given, wherein three are alike in some manner while one is different. Choose the odd one:

Q2. Select the option in which the words share the same relationship as shared by the given pair of words: Gujarat: Gandhi Nagar

Q5. Select the letter that can replace the question mark in the following series:
D, X, U, O, L, ?, C

Q6. Select the option in which the numbers share the same relationship as that shared by that given pair of numbers:
70 : 120

Q8. A cube is made by folding the given sheet. In the cube so formed, what would be the number on the opposite of 4? 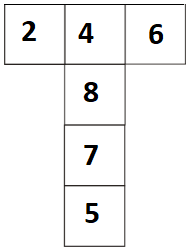 Q11. Which one of the given options would be a logical sequence of the following words?

Solution: Option – (c); the answer has been selected based on the population in ascending order.

Q12. Select the combination of letters that, when sequentially placed in the blanks of the given series, will complete the series:

Q13. Three statements are given, followed by three conclusions – I, II & III. You have to consider these statements to be true, even if they seem at variance from commonly known facts. Decide which of the given conclusions logically follows from the given statements?

Statements:
Each silk is fan.
Few silk is bat.
Some sofa is not silk. 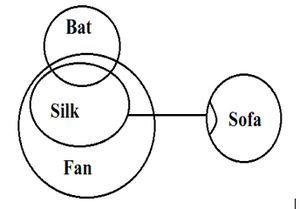 Solution: Option – (a), because all the professions are different.

Q15. Which pair does NOT belong with the others?

Q16. Study the given pattern carefully and select the number that can replace the question mark (?) in:

Q17. In a code language, INVERT is coded as HNWGUX. How will FARMER be written in that language?

Q18. Four words have been given, out of which three are alike in some manner, while one is different. Select the odd word.

Solution: Option – (c) Except for fish, all others live in water and land.

Q19. The sequence of folding a piece of paper and how the folded paper has been cut is shown in the following figures. How would this paper look when unfolded?

Q20. The ratio of the present ages of Samdish and Manoj is 7 : 8. If the difference between their ages is 8 years, what will be Samdish’s age after 7 years?

Q22. How many triangles are there in the given figure?

Solution: Option – (c); Cowshed is where cattle are kept. Similarly, the forest is home to lions.

Q24. Select the letter cluster that can replace the question (?) in the following series:

Q25. Select the figure that can replace the question mark (?) in the following series: