Spring is one of the most popular Java EE frameworks. It is an open-source lightweight framework that allows Java EE 7 developers to build simple, reliable, and scalable enterprise applications. This framework mainly focuses on providing various ways to help you manage your business objects. It made the development of Web applications much easier than compared to classic Java frameworks and application programming interfaces (APIs), such as Java database connectivity (JDBC), JavaServer Pages(JSP), and Java Servlet. This framework uses various new techniques such as Aspect-Oriented Programming (AOP), Plain Old Java Object (POJO), and dependency injection (DI), to develop enterprise applications. Now talking about Spring Annotation

So what happens is, whenever we configure Spring Beans using dependency injection, sometimes we want to make sure everything is initialized correctly before the bean starts serving the client requests. Likewise, when the context is destroyed, we may have to close some resources utilized by spring beans.

When we annotate a Spring Bean method with PreDestroy annotation, it gets called when the bean instance is getting removed from the context. Remember that if your spring bean scope is “prototype” then it’s not completely managed by the spring container and the PreDestroy method won’t get called. If there is a method named shutdown or close then the spring container will try to automatically configure them as callback methods when the bean is being destroyed.

Developers, who are using Java 9+, both @PostConstruct and @PreDestroy annotations are part of Java EE. And since Java EE has been deprecated in Java 9 and removed in Java 11 we have to add an additional dependency to use these annotations:

A. If you are using Maven

B. If you add the jar manually

Note: If you are on Java 8 or the lower version, then you won’t have to perform the above stuff.

Step 1: Create a simple Java project in your preferred IDE (IntelliJ IDEA or Eclipse). You may refer to these articles:

Step 2: Create some tables inside your database. In this article, we have used the MySQL database. And the following data has been present inside our MySQL Database. 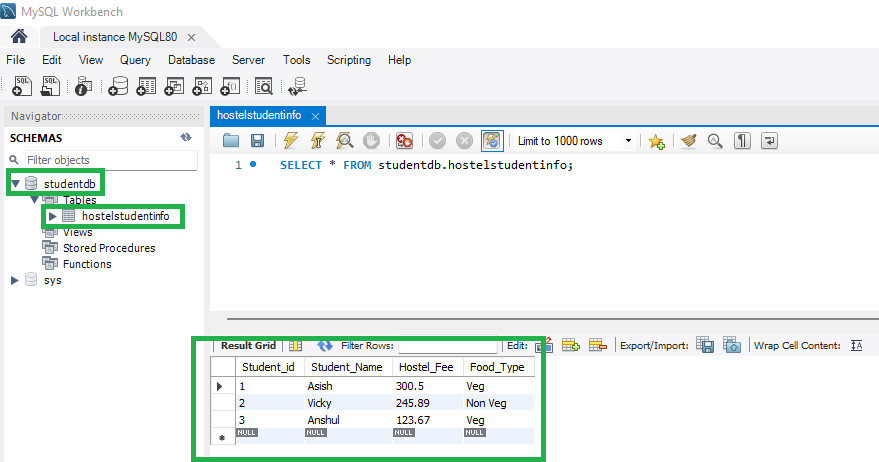 So here studentdb is our schema name and hostelstudentinfo is the table name. Similarly, you can create your own schema and table and put some data inside that table manually.

Tip: You can refer to these articles:

Step 3: Go to the Java project and create one class named StudentDAO and inside the class, we are going to create a single method selectAllRows() to fetch all the data present inside our MySQL database. We are also going to declare our four most important attributes to connect our Java program with the MySQL server.

Step 4: Now we have to Add the External JAR Files to an IntelliJ IDEA Project. A JAR (Java Archive) is a package file format typically used to aggregate many Java class files and associated metadata and resources (text, images, etc.) into one file to distribute application software or libraries on the Java platform. In simple words, a JAR file is a file that contains a compressed version of .class files, audio files, image files, or directories. We have to add the following external jar files to our Java project

You may download the jar file from the following links:

Step 5: Let’s create the bean of StudentDAO class inside the beans.xml file and inject the values of the properties by setter injection. You may refer to this article Spring – Injecting Literal Values By Setter Injection. Below is the code for the beans.xml file.

Step 6: Create the Main class and let’s test our application is running fine or not. Below is the code for the Main.java file.

Output: One can see we have successfully fetched the data from the MySQL Database.

Note: So what’s the problem with the above code? The problem is, suppose we want to define another method deleteStudentRecord(int studentId) in the StudentDAO class something like as shown in below example as follows:

Now you can see we have to write some lines of code again and again. Then think if suppose we want to perform 100 different operations we have to write the same code again and again. So what we can do. We can write the common code inside a method and we can invoke the method. We can write something like this inside a method named createStudentDBConnection()

Similarly, we can also define another method to close the connection. We can write something like this inside a method named closeConnection()

And we can invoke those methods inside the selectAllRows() and deleteStudentRecord() something like this.

But we are doing the same thing again. We are calling the createStudentDBConnection() and closeConnection() method again and again inside the selectAllRows() and deleteStudentRecord() methods. Suppose we have a total of 100 utility methods like that then we have to call these methods 100 times. So we will tell our spring framework that once you (spring framework) create the bean please execute the createStudentDBConnection() method. So the way we are going to tell the spring framework is by putting the @PostConstruct annotation. In summary, we can tell that

Hey Spring, once you create the StudentDAO object please create createStudentDBConnection() by yourself. Don’t wait for us to call it.

The destroy() method will be called before the bean is removed from the container. Now let’s coming to the closeConnection() method. We defined this method for cleaning up unused references. For example in this project the con variable. So we can make any method as destroy() method by marking it as @PreDestroy. So now we can write the code something like that

Note that we can also use the @PreDestroy annotation before the closeConnection() method. Now the complete code for the StudentDAO.java class is

Before running the application make sure you have added the following line inside your beans.xml file to use the annotation

The complete code for the beans.xml file is given below

The complete code for the Main.java file is given below