Spring Boot is built on the top of the spring and contains all the features of spring. And is becoming a favorite of developers these days because of its rapid production-ready environment which enables the developers to directly focus on the logic instead of struggling with the configuration and setup. Spring Boot is a microservice-based framework and making a production-ready application in it takes very little time. Following are some of the features of Spring Boot:

For more information please refer to this article: Introduction to Spring Boot. In this article, we are going to discuss how to use JpaRepository to manage data in a Spring Boot application.

JpaRepository is a JPA (Java Persistence API) specific extension of Repository. It contains the full API of CrudRepository and PagingAndSortingRepository. So it contains API for basic CRUD operations and also API for pagination and sorting.

Method 1: saveAll(): Saves all given entities.

Parameters: Entities, keeping note that they must not be null nor must it contain null.

Return Type: the saved entities; will never be null. The returned Iterable will have the same size as the Iterable passed as an argument.

Exception Thrown: It throws IllegalArgumentException in case the given entities or one of its entities is null.

Method 2: getById(): Returns a reference to the entity with the given identifier. Depending on how the JPA persistence provider is implemented this is very likely to always return an instance and throw an EntityNotFoundException on first access. Some of them will reject invalid identifiers immediately.

Parameters: id – must not be null.

Return Type: a reference to the entity with the given identifier.

Method 3: flush(): Flushes all pending changes to the database.

Parameters: The entity to be saved. Must not be null.

Method 5: deleteAllInBatch(): Deletes the given entities in a batch which means it will create a single query. This kind of operation leaves JPAs first-level cache and the database out of sync. Consider flushing the EntityManager before calling this method.

Parameters: The entities to be deleted, must not be null.

Implementation: Let us consider a Spring Boot application that manages a Department entity with JpaRepository. The data is saved in the H2 database. We use a RESTful controller.

Example: Here is the complete code for the pom.xml file.

Step 3: Create 4 packages as listed below and create some classes and interfaces inside these packages as seen in the below image 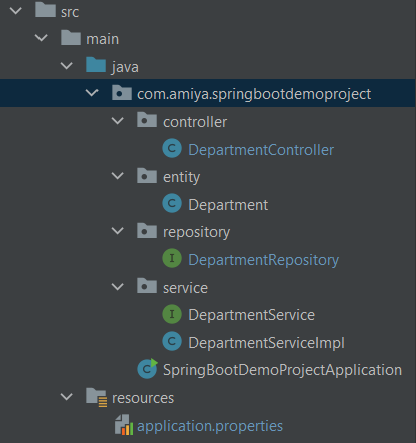 Create a simple POJO class inside the Department.java file.

Create a simple interface and name the interface as DepartmentRepository. This interface is going to extend the JpaRepository as we have discussed above.

Step 6: Inside the service package

Step 7: Inside the controller package

Inside the package create one class named as DepartmentController.

Step 8: Below is the code for the application.properties file

Now run your application and let’s test the endpoints in Postman and also refer to our H2 Database.

H2 Database is a follows: