Soil is a vital natural resource that sustains the bulk of the world’s plant and animal life. It is a resource that can be replenished. Soil erosion is the loss of soil cover owing to natural forces such as wind and water. Plants and trees use their roots to keep the soil moist and retain the soil particles together. Deforestation, overgrazing, construction, and mining operations all contribute to the loss of vegetation cover.

Soil becomes dry and loose without vegetation cover, and it is easily eroded. Defective agricultural methods, such as ploughing up and down a hill, increase the rate of soil erosion by increasing the speed of the water running down the slope. Gully erosion occurs when running water carves deep channels through clayey soils, converting the land to bad land and rendering it unfit for cultivation.

What is Soil Erosion?

Soil Erosion is the process, in which the soil particles are loosened or washed away in the valleys, oceans, rivers, streams or far away lands. Soil erosion is a non-stoppable process that occurs either slowly or at a higher rate.

It results in a dangerous situation which is a continuous loss of topsoil, soil collapse, ecological degradation, etc. The soil particles are loosening or being washed away in valleys, oceans, rivers, streams, or faraway areas as a result of this process. Human activities such as agriculture and deforestation have exacerbated the problem.

Soil erosion is a continuous process that can occur at a moderate or rapid pace. It leads to a steady loss of topsoil, ecological deterioration, and soil collapse, among other things. Soil erosion can be prevented by various methods like controlling afforestation, change in farming practices, etc. Soil erosion removes the surface soil. Surface soil has the highest biological activity and the greatest amount of organic matter as illustrated below: 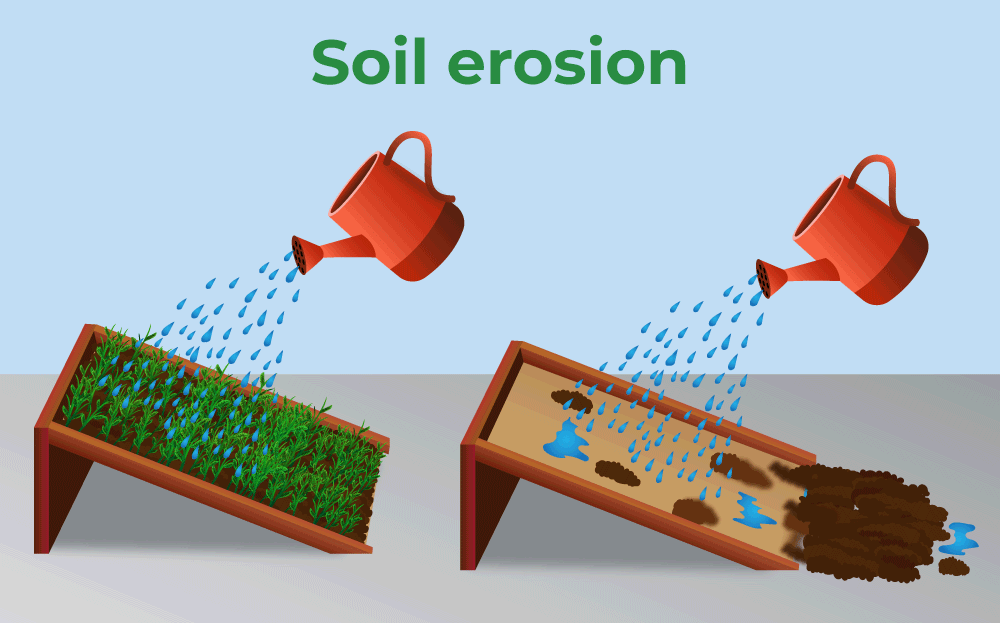 There are many reasons why soil erosion occurs:-

The thing that we can do to improve the stability or quality of our crops is to reduce soil erosion. Different forms of soil erosion are as:

The major effects of soil erosion include:

This is a serious environmental issue. Steps should be taken to reduce this problem. There are various listed methods for prevention:

There are different methods through which soil can be conserved:

Following are the methods of Soil Conservation:

Question 2: Define Resources and their kind.

Environmental material which can be used to satisfy our general needs which are economically feasible, culturally acceptable and more on is technologically accessible, is termed as ‘Resource’.

Question 3: Define types of resources on the basis of origin.

On the basis of origin resources are of two types:

Question 4: Give the percentage of Land under important relief features.

The percentage of Land under important relief features are:

Question 5: Define why is agriculture the cause of Erosion.

Agriculture is one of the cause of the soil erosion due to the farming practices, it disturb the top soil. The trees are cut down and the lands are ploughed for the germination of new seed. Most crop are grown during springs and most of the soil is eroded during winters because the land lies fallow during winters. it causes soil erosion.

Some of the Soil erosion preventions are as,

Agents that are responsible for Soil Erosion are water, ice (glaciers), snow, air (wind), plants, and animals (including humans), etc.

My Personal Notes arrow_drop_up
Previous
Ammonium Bicarbonate Formula - Structure, Properties, Uses, Sample Questions
Next
Self-Referential Classes in C++
Recommended Articles
Page :
Types Of Soil - Sandy Soil, Clay Soil, Silt Soil, And Loamy Soil
29, Jun 22
What steps can be taken to control soil erosion in the hilly areas?
06, Jul 22
How soil affects the vegetation of an area?
22, Jun 22
Name three states having black soil and the crop which is mainly grown in it
09, Jul 22
What are the factors responsible for the formation of Soil?
11, Jul 22
How red and yellow soil are formed why do they look red?
11, Jul 22
Soil Conservation Methods
14, Jun 22
What are the various methods of soil conservation?
23, Jul 22
What type of soil is found in the river deltas of the eastern coast?
17, Jul 22
What are the Important Characteristics of Arid Soil in India?
31, Aug 22
Why Quarrying has become a major environmental concern?
29, Sep 22
Give a brief description of the Mangrove Forests
23, Sep 22
Article Contributed By :