Below are the principles of software testing:

There are two main categories of software testing techniques:

Each testing technique has further types as showcased in the below diagram. Each one of them will be explained in detail with examples below. 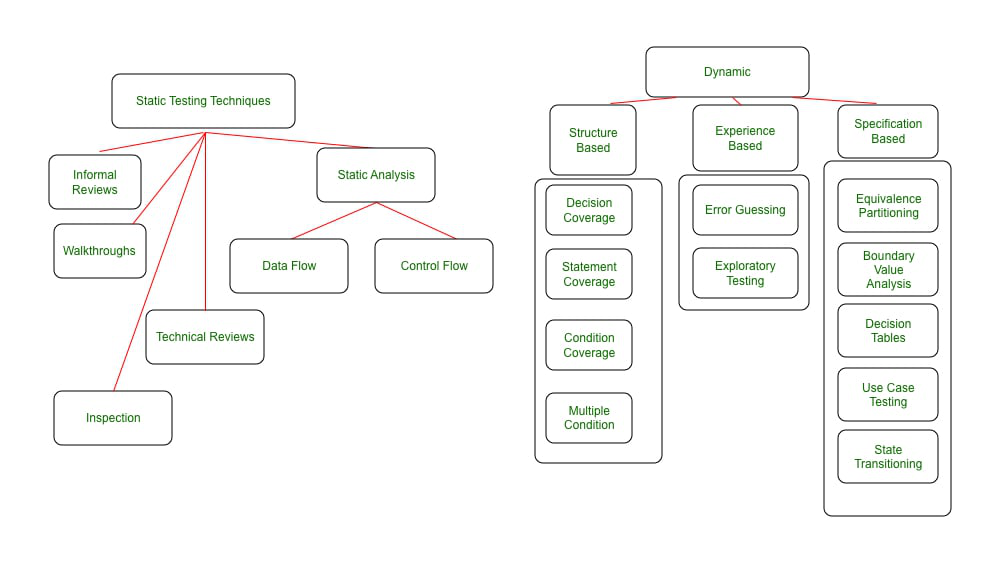 Code Coverage is normally done in Component and Integration Testing. It establishes what code is covered by structural testing techniques out of the total code written. One drawback of code coverage is that- it does not talk about code that has not been written at all (Missed requirement), There are tools in the market that can help measure code coverage.

There are multiple ways to test code coverage:

1. Statement coverage: Number of Statements of code exercised/Total number of statements. For Example, If a code segment has 10 lines and the test designed by you covers only 5 of them then we can say that statement coverage given by the test is 50%.

2. Decision coverage: Number of decision outcomes exercised/Total number of Decisions. For Example, If a code segment has 4 decisions (If conditions) and your test executes just 1, then decision coverage is 25%

3. Conditional/Multiple condition coverage: It has the aim to identify that each outcome of every logical condition in a program has been exercised.

1. Error guessing: It is used by a tester who has either very good experience in testing or with the application under test and hence they may know where a system might have a weakness. It cannot be an effective technique when used stand-alone but is really helpful when used along with structured techniques.

2. Exploratory testing: It is hands-on testing where the aim is to have maximum execution coverage with minimal planning. The test design and execution are carried out in parallel without documenting the test design steps. The key aspect of this type of testing is the tester’s learning about the strengths and weaknesses of an application under test. Similar to error guessing, it is used along with other formal techniques to be useful.

This includes both functional and nonfunctional techniques (i.e. quality characteristics). It basically means creating and executing tests based on functional or non-functional specifications from the business. Its focus is on identifying defects corresponding to given specifications. Here are the types of specification-based techniques:

1. Equivalence partitioning: It is generally used together and can be applied to any level of testing. The idea is to partition the input range of data into valid and non-valid sections such that one partition is considered “equivalent”. Once we have the partitions identified, it only requires us to test with any value in a given partition assuming that all values in the partition will behave the same. For example, if the input field takes the value between 1-999, then values between 1-999 will yield similar results, and we need NOT test with each value to call the testing complete.

2. Boundary Value Analysis (BVA): This analysis tests the boundaries of the range- both valid and invalid. In the example above, 0,1,999, and 1000 are boundaries that can be tested. The reasoning behind this kind of testing is that more often than not, boundaries are not handled gracefully in the code.

3. Decision Tables: These are a good way to test the combination of inputs. It is also called a Cause-Effect table. In layman’s language, One can structure the conditions applicable for the application segment under test as a table and identify the outcomes against each one of them to reach an effective test.

4. Use case-based Testing: This technique helps us to identify test cases that execute the system as a whole- like an actual user (Actor), transaction by transaction. Use cases are a sequence of steps that describe the interaction between the Actor and the system. They are always defined in the language of the Actor, not the system. This testing is most effective in identifying the integration defects. Use case also defines any preconditions and postconditions of the process flow. ATM machine example can be tested via use case:

5. State Transition Testing: It is used where an application under test or a part of it can be treated as FSM or finite state machine. Continuing the simplified ATM example above, We can say that ATM flow has finite states and hence can be tested with the State transition technique.  There are 4 basic things to consider –

A state event pair table can be created to derive test conditions – both positive and negative. 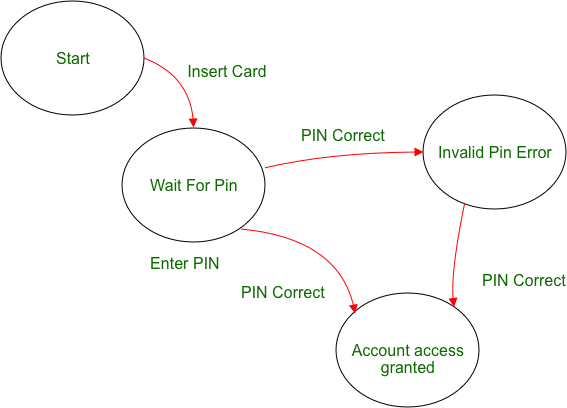