Software testing can be stated as the process of verifying and validating whether a software or application is bug-free, meets the technical requirements as guided by its design and development, and meets the user requirements effectively and efficiently by handling all the exceptional and boundary cases.

The process of software testing aims not only at finding faults in the existing software but also at finding measures to improve the software in terms of efficiency, accuracy, and usability. It mainly aims at measuring the specification, functionality, and performance of a software program or application.

Software testing can be divided into two steps:
1. Verification: it refers to the set of tasks that ensure that the software correctly implements a specific function.

1. Manual Testing: Manual testing includes testing software manually, i.e., without using any automation tool or any script. In this type, the tester takes over the role of an end-user and tests the software to identify any unexpected behavior or bug. There are different stages for manual testing such as unit testing, integration testing, system testing, and user acceptance testing.

Testers use test plans, test cases, or test scenarios to test software to ensure the completeness of testing. Manual testing also includes exploratory testing, as testers explore the software to identify errors in it.

2. Automation Testing: Automation testing, which is also known as Test Automation, is when the tester writes scripts and uses another software to test the product. This process involves the automation of a manual process. Automation Testing is used to re-run the test scenarios quickly and repeatedly, that were performed manually in manual testing.

Apart from regression testing, automation testing is also used to test the application from a load, performance, and stress point of view. It increases the test coverage, improves accuracy, and saves time and money when compared to manual testing.

What are the different types of Software Testing Techniques ?

Software testing techniques can be majorly classified into two categories:

1. Black Box Testing: The technique of testing in which the tester doesn’t have access to the source code of the software and is conducted at the software interface without any concern with the internal logical structure of the software is known as black-box testing.

2. White-Box Testing: The technique of testing in which the tester is aware of the internal workings of the product, has access to its source code, and is conducted by making sure that all internal operations are performed according to the specifications is known as white box testing. 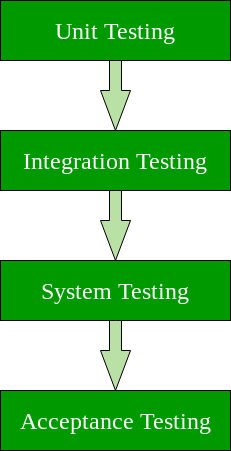 Note: Software testing is a very broad and vast topic and is considered to be an integral and very important part of software development and hence should be given its due importance.