Prototyping is a software development methodology that focuses on the use of working models that are constantly refined based on feedback from the end user. Prototyping is most commonly used to develop systems with significant end-user interaction and complex user interfaces.

Because it allows for the capture of customer requirements at an early stage of development, software prototyping is becoming increasingly popular as a software development model. It allows for valuable customer feedback and assists software designers and developers in understanding what is expected directly from sales.

The term “software prototyping” refers to the process of creating software application prototypes that demonstrate the functionality of the product under development but may not contain the exact logic of the original software.

What is Software Prototyping? 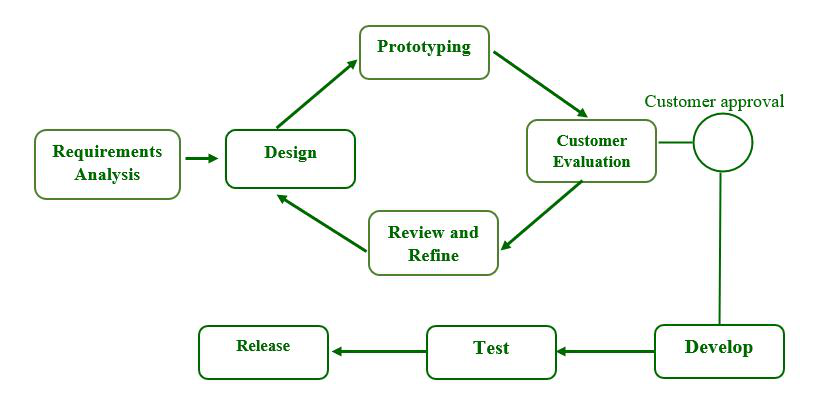 Step-1: Requirements gathering and analysis :
A requirement analysis is the first step in developing a prototyping model. During this phase, the system’s desires are precisely defined. During the method, system users are interviewed to determine what they expect from the system.

Step-2: Quick design :
The second phase could consist of a preliminary design or a quick design. During this stage, the system’s basic design is formed. However, it is not a complete design. It provides the user with a quick overview of the system. The rapid design aids in the development of the prototype.

Step-3: Build a Prototype :
During this stage, an actual prototype is intended to support the knowledge gained from quick design. It is a small low-level working model of the desired system.

Step-4: Initial user evaluation :
The proposed system is presented to the client for preliminary testing at this stage. It is beneficial to investigate the performance model’s strengths and weaknesses. Customer feedback and suggestions are gathered and forwarded to the developer.

Step-6: Implement Product and Maintain :
The final system was fully tested and distributed to production after it was developed to support the original version. To reduce downtime and prevent major failures, the programmer is run on a regular basis.

1. Rapid Throwaway Prototype :
The preliminary requirement is used for quick throwaway. It is quickly developed to show how the need will appear visually. Customer feedback aids in the movement of demand change, and the prototype is re-created until the need is basic. As a result, the upgraded version is rejected and cannot be the last accepted type. This programme aids in the testing of ideas and the rapid response to customer needs.

2. Evolutionary Prototyping :
It assists you in avoiding both time and effort waste. This is due to the fact that performing a specific type from the start of each method of communication can be time-consuming. This model is useful for a project that involves the use of an unknown replacement technology. It is also used in high-end projects where each feature must be tested only once. It’s useful when the need isn’t stable or isn’t clearly understood at the start.

3. Incremental Prototyping :
The final product is decimated into small prototypes and developed individually in incremental prototyping. The various prototypes are eventually combined into a single product. This method is useful for reducing feedback time between the user and, consequently, the application development team.

4. Extreme Prototyping :
The extreme prototyping method is commonly used in web development. It is divided into three stages that must be completed in order.

Software Prototyping Application :
Software prototyping is extremely beneficial in the development of systems that require a high level of user interaction, such as online applications. Systems that require users to fill out forms or view various screens before data is processed can benefit greatly from prototyping in order to convey the exact look and feel even before the software is developed. Prototyping is usually not an option for software that involves a large amount of information processing and the majority of the functionality is internal with little programme. Prototype development can be an additional overhead in such projects and should necessitate a significant amount of additional effort.