There are many ways to organize the project team. Some important ways are as follows :

Hierarchical team organization :
In this, the people of organization at different levels following a tree structure. People at bottom level generally possess most detailed knowledge about the system. People at higher levels have broader appreciation of the whole project. 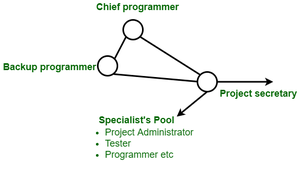 Egoless Team Organization :
Egoless programming is a state of mind in which programmer are supposed to separate themselves from their product. In this team organization goals are set and decisions are made by group consensus. Here group, ‘leadership’ rotates based on tasks to be performed and differing abilities of members.

In this organization work products are discussed openly and all freely examined all team members. There is a major risk which such organization, if teams are composed of inexperienced or incompetent members.

Democratic Team Organization :
It is quite similar to the egoless team organization, but one member is the team leader with some responsibilities :