Software and its Types 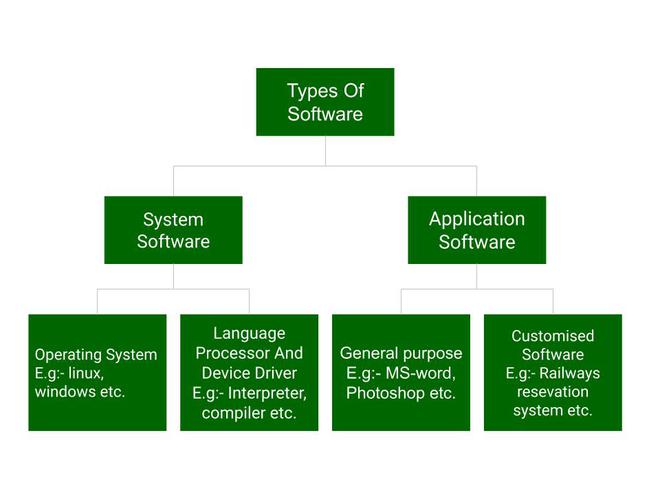 Above is the diagram of types of software. Now we will briefly describe each type and its subtypes :

System software is software that directly operates the computer hardware and provides the basic functionality to the users as well as to the other software to operate smoothly. Or in other words, system software basically controls a computer’s internal functioning and also controls hardware devices such as monitors, printers, and storage devices, etc. It is like an interface between hardware and user applications, it helps them to communicate with each other because hardware understands machine language(i.e. 1 or 0) whereas user applications are work in human-readable languages like English, Hindi, German, etc. so system software converts the human-readable language into machine language and vice versa.

Let us discuss some of the features of System Software:

It has two subtypes which are:

Software that performs special functions or provides functions that are much more than the basic operation of the computer is known as application software. Or in other words, application software is designed to perform a specific task for end-users. It is a product or a program that is designed only to fulfill end-users’ requirements. It includes word processors, spreadsheets, database management, inventory, payroll programs, etc.

Let us discuss some of the features of Application Software:

There are different types of application software and those are:

Now, let us discuss some difference between system software and application software:

Question 1. Which one of the following is not software?

The correct option is C, i.e.,Keyboard

Because a keyboard is not software, as it is a hardware device( input device).

Question 2. Which one of the following is acts as an interface between the user and the computer hardware?

The correct option is B, i.e., Operating System.

Because an operating system provides an interface to the user, which helps the user to interact with the computer system.

The correct option is A, i.e.,Machine language

The only language that the computer can process or execute is called machine language as this language is capable of telling the computer explicitly what to do.

Question 4. Which of the following software is used to control the operations of a computer?

The correct option is B, i.e.,System Software

There are two types of software: system software and application software. System Software is used to control the operations and also controls a computer’s internal functioning and hardware devices.

Question 5. Which one of the following software is designed to solve a specific problem or to do a specific task?

The correct option is B, i.e., Application Software

Because a software that performs special functions or provides function which are much more than basic operation of the computer are application software.

Question 6. Which one of the following is not an example of an operating system?

The correct option is D, i.e., None of the above

Because Linux, Apple macOS, Microsoft Windows are the examples of operating systems.

Question 7. Which of the following is a language processor?

The correct option is B, i.e., Compiler

My Personal Notes arrow_drop_up
Previous
How to Insert a Picture in MS Powerpoint?
Next
How to Find Square Root of a Number?
Recommended Articles
Page :
Difference between fundamental data types and derived data types
04, Sep 18
What is a Flowchart and its Types?
20, Sep 21
Different Types of Queues and its Applications
19, May 20
Find N numbers such that a number and its reverse are divisible by sum of its digits
06, May 20
What is an Expression and What are the types of Expressions?
02, Aug 19
Check if the product of digit sum and its reverse equals the number or not
02, Nov 17
Internet and its Services
01, Sep 21
Python program to create a list of tuples from given list having number and its cube in each tuple
23, Oct 18
Basics of Computer and its Operations
07, Aug 18
C++ string class and its applications
25, Mar 16
Types of Operating Systems
05, Apr 18
Different Types of Websites
23, Jun 21
Different types of Coding Schemes to represent data
25, Oct 18
Types of Animations in Flash
16, Jul 21
Types of Computer Ports
15, Jun 21
Types of Computers
01, Jun 21
Types of Computer Networks
13, Jun 21
What is Cyber Bullying? Definition, Types, Effects, Laws
11, Aug 21
What is Plagiarism? Definition, Types, How to Avoid, Laws
11, Aug 21
What is a Computer Virus? Definition, History, Types, Symptoms
11, Aug 21
What is Hacking? Definition, Types, Identification, Safety
01, Sep 21
What is a Storage Device? Definition, Types, Examples
01, Sep 21
Types of Internet Protocols
17, Oct 21
Mobile Technologies - Definition, Types, Uses, Advantages
07, Nov 21
Article Contributed By :