Software and hardware are interdependent. Without the hardware, a software is an abstraction. When you put hardware and software togather, you create a system. This system will be able to carry out multiple complex computations and return the result to its environment.

This illustrates one of the fundamental characteristics of the system. Socio-technical system is basically a study of how any technology is used and produced. This help us to identify the ethical errors in technical and social aspects of the systems. Socio-technical system is a mixture of people and technology. It consists of many items. These items are difficult to distinguish from each other because they all have close inter-relationships. Some of the items are shown in figure: 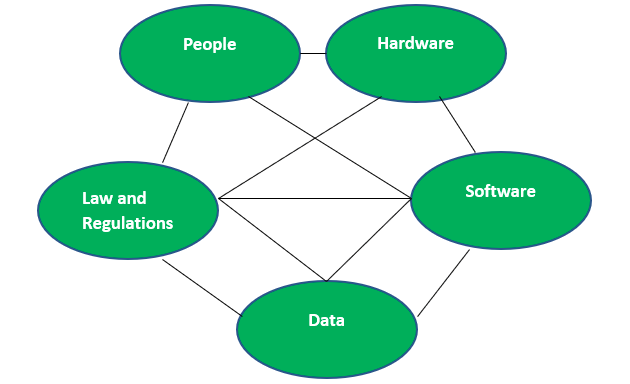 These Systems have properties that are perceptible when all the components are integrated and operate together.

Example:
Lets say, Software engineers in Silicon Valley may build a software with all sorts of bells and whistles expecting everyone to be tech savy and without even considering the basic configuration of system requirement. If a large scale of people are in fact elderly and unaccustomed to the interface and have traditional systems operating on old technology then again the whole system will significantly reduced.

That’s the reason we are interested not only in technical dimension but also domain of Socio-technical systems. The system include non-technical elements such as people, processes, regulations, goals, culture, etc., as well as technical components such as computers, software, infrastructure, etc.

To understand socio-technical systems as a whole, you have to know the various layers, as shown in figure.

These systems can be impossible to understand. So, we refer to these 7 layers. These layers make up the Socio-technical systems stack.

Complete Interview Preparation
View Details
System Design-Live Classes for Working Professionals
View Details
Data Structures & Algorithms- Self Paced Course
View Details
Most popular in GBlog
Most visited in Misc
We use cookies to ensure you have the best browsing experience on our website. By using our site, you acknowledge that you have read and understood our Cookie Policy & Privacy Policy