Size and Location of India

India is one of the earliest cultures in the world and has a remarkable history. it has attained composite socio-economic progression during the period of 50 years. It has moved towards exhibiting extraordinary progress in the departments of agriculture, industry, technology and overall economic development. India has also come up with the remarkable making of world history.

India is an extensive country as well the 7th largest country in the world. It’s lying completely in the northern hemisphere. The mainland expands between latitude (8°4′ N and 37°6′ N) and longitude (68°7’E and 97°25’E) and the tropic of cancer (23°30’N) cleft the country into near two equal parts to the southeast and southwest of the mainland, lies in the Andaman and Nicobar Islands and the Lakshadweep Islands in the Bay of Bengal and the Arabian Sea.

The southernmost point of the Indian Union – Indira point got submerged under seawater in 2004 during the tsunami. The mainland of India is wide from Kashmir in the north to Kanyakumari in the south and Arunachal Pradesh in the east to Gujarat in the west. India’s territorial limit further extends towards the sea up to 12 nautical miles (about 21.9 km) from the coast. When we talk about the latitudinal and longitudinal extent of India, they are roughly about 30 degrees. Whereas the actual distance measured from north to south extremity is 3,214 km and that from east to west is only 2,933 km. from the values of Latitudes, it is understood as-

From the values of longitude, it is quite discernible that there is a variation of nearly 30 degrees. it causes a time difference of nearly two hours between the easternmost and the westernmost parts of our country.

Concept of IST and GMT 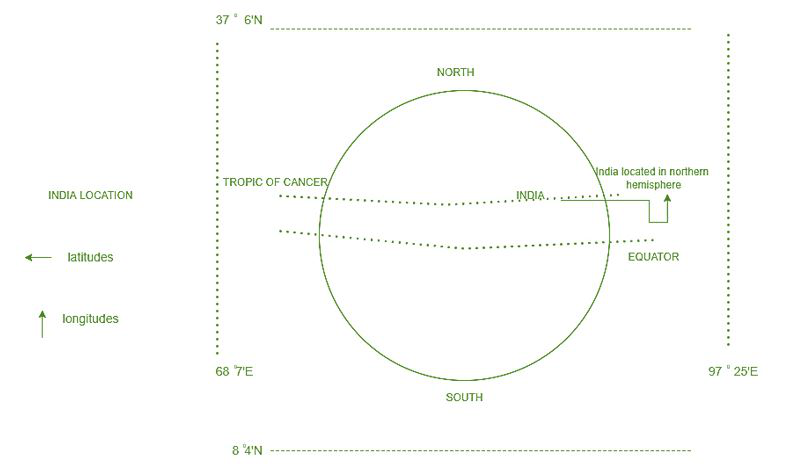 The landmass of India has an area of 3.28 million sq. km and it equals 2.4% area of the world making the India 7th largest country. But before India, there are 6 more largest countries – Russia, Canada, U.S.A, China, Brazil and last one in Australia.

Here are some points and features related to the Size of India: 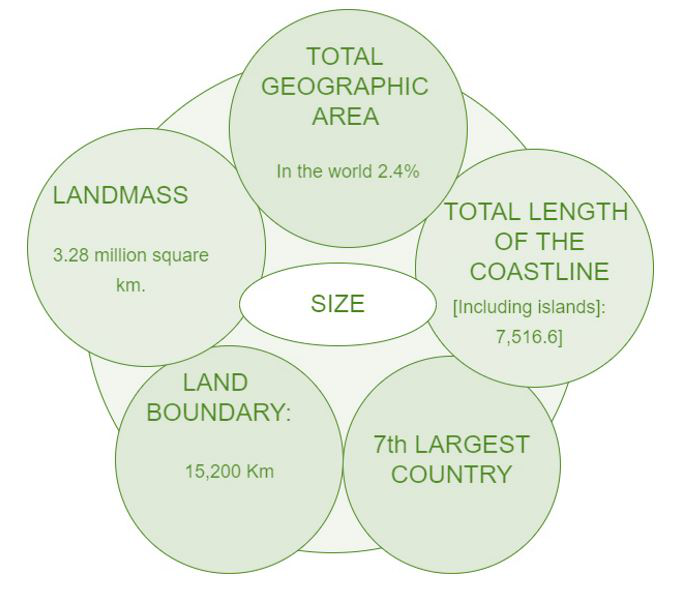 The mainland expands between latitude (8°4′ N and 37°6′ N) and longitude (68°7’E and 97°25’E) and the tropic of cancer (23°30’N) cleft the country into near two equal parts to the southeast and southwest of the mainland, lies in the Andaman and Nicobar Islands and the Lakshadweep Islands in the Bay of Bengal and the Arabian Sea.

Question 2: Name the seven largest countries in the world.

The seven largest countries in the world are: Russia, Canada, U.S.A, China, Brazil, Australia and India.

Question 3: The Difference between the duration of day and night is hardly felt at Kanyakumari but not so in Kashmir. Why?

Question 5: How is India’s geographical location favourable for international trade?

India’s geographical location is favourable for international trade as,

My Personal Notes arrow_drop_up
Previous
Creating a Ghost Animation in Flash
Next
Rate of a Chemical Reaction
Recommended Articles
Page :
Geographical Location of India
30, Jun 22
The central location of India at the head of the Indian Ocean is considered of great significance. Why?
30, Aug 22
Industrial Location
10, May 22
Factors Affecting Location of Industries
21, May 22
Coniferous Forests - Temperature, Climate, Location, Facts
14, Jun 22
Bhakra Nangal Dam - History, Specifications, Location, Uses
22, Jun 22
Flora and Fauna of India
24, Apr 22
India and Its Neighbours
20, May 22
Conservation of Forest and Wildlife in India
22, May 22
Land Utilization and Land Use Pattern in India
20, May 22
Tropical Thorn Forests and Scrubs of India
23, Mar 22
Which are the major rice and wheat producing areas of India?
07, Jun 22
Population Growth and Process of Population Change in India
20, Jun 22
Challenges to Free and Fair Elections in India
12, Jun 22
Name the important states in India that are leading producer in Jowar, Ragi and Bajra
27, Jun 22
India and the World
12, Mar 22
What factors are responsible for the distribution of plants and animals in India?
15, Jul 22
Quite a few species of plants and animals are endangered in India. Why?
20, Jul 22
Give the characteristics and effects of the monsoon rainfall in India
20, Jul 22
Characteristics and Effects of Monsoons in India
23, Jul 22
Depletion of Forest and Wildlife in India
30, Jul 22
What are Jet Streams and How do they Affect the Climate of India?
29, Jul 22
Explain land use pattern in India and Why has the land under forest not increased much since 1960-61?
17, Aug 22
Why has India a rich heritage of flora and fauna?
16, Aug 22
Article Contributed By :