(i) Any two line segments are similar.

(iii) Any two rectangles are similar.

(iv) Any two squares are similar.

(v) Any two circles are similar.

Two triangles are said to be similar to each other if 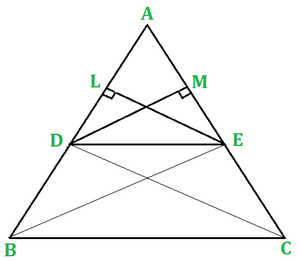 Given: A △ABC in which DE || BC and DE intersects AB and AC at D and E respectively.

Now △DBE and △ECD being on the same base DE and between the same parallels DE and BC , we have:

Examples Based on Thales’ Theorem 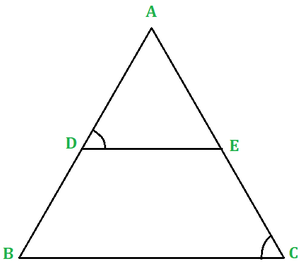 By Thales Theorem we have,

Example 3: Prove that a line drawn through the midpoint of one side of a triangle (figure 1) parallel to another side bisects the third side.

Given a ΔΑΒC in which D is the midpoint of AB and DE || BC, meeting AC at E.

The Converse of Thales’ Theorem

Theorem: (Converse of Thales’ theorem) If a line divides any two sides of triangle in the same ratio then the line must be parallel to the third side. 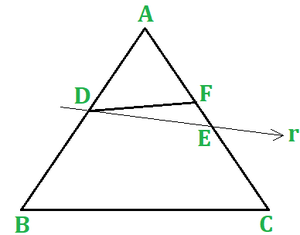 Given: A △ABC and a line r intersecting AB at D and AC at E, such that AD/DB = AE/EC

Then by Thales Theorem,

This is possible only when E and F coincide.

Examples Based on Converse of Thales’ Theorem

So, AB = AC [sides opposite to equal angles].

Hence, △ABC is an isosceles triangle.

Hence, by converse of Thales Theorem, DE || BC.

Example 3: Prove that the line segment joining the midpoints of any two sides of a triangle (figure 2) is parallel to the third side.

In △ABC in which D and E are the midpoints of AB and AC respectively.

Since D and E are the midpoints of AB and AC respectively, we have :

Hence, by converse of Thales Theorem, DE || BC