In Order to find the value of different sizes and compare them, measurement is used. Measuring things is not only a concept but also practically used in everyday life, for example, a milkman measures milk before selling it in order to make sure the correct amount is served, A tailor always measures the size of the body before making suit, A cobbler measures the size of the foot before making/giving the sole for the shoes, and so many other examples are available around us to prove the significance of measurement.

Measurement is comparing the quantity to be measured with the standard quantity available. Measurement is one topic which is not only taught in math but also in Physics and Chemistry since every subject requires the understanding of measurement, in order to measure the quantities.

If the value of a quantity has more than the significant digits assigned for the value, the value of the quantity is sure to be flawed and misleading. This is the reason why Errors are taught. Significant figures are known as the resolution of the measurement. 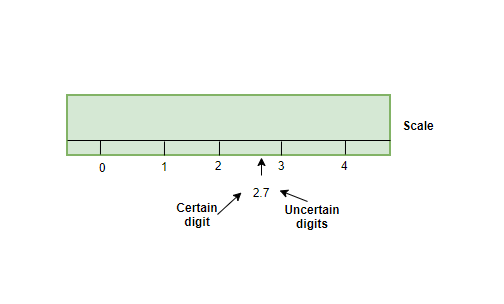 For example, 1.03 have 3 significant figures.

For example, 0.067 (here 2 zeroes are present on the left side, are considered significant in nature)

For example, 2.30 has 3 significant figures.

Two values when they go arithmetic operation, the final value obtained will always have more significant figures obtained. Say, in order to determine the current in a circuit, the resistance and voltage are given as 6.77ohm and 12.559volts. The current obtained will be 1.8550960118168, the value of current has a lot more significant figures as compared to the values of voltage and resistance, but it is known that when some operation is done on two quantity containing errors, the final result will sure to have more errors than the given quantities. Therefore, certain rules are made to understand the significant figures when they undergo any arithmetic operation,

For example, Take the previous example where R= 6.77ohm and V= 12.559volts, the current is described as,

According to the rule, I should have 3 significant digits, that is, I= 1.85 amperes.

Important Points to keep in mind while determining significant figures:

Question 1: Determine the significant figures in the following quantities,

Based on the rules provided for determining significant digits,

Question 2: Two digits, 33. 689 and 44. 23 are added together. Find the significant figures in the resultant value obtained.

Question 3: The mass of an object is 50.9kgs and the volume is 2.34m3. Find the Density of the object based on the significant figure rule.

Density of an object is defined as,

Since, the least significant value in the input is 3.

Question 4: Two Values are multiplied to obtain a certain value as a result. The input values are 3.99 and 1.5789, Find the Significant digits of the resultant value obtained.

Therefore, The result will have 3 significant digits.

The difference is due to the fact that 0.06700 is a number less than 1 and hence, the zeros on the left are significant, but the zeroes on the rightmost side are insignificant (rule 4). The significant digits are 4.

While, the number 6.700 is a number greater than 1 and also a decimal, therefore, the zeroes on the rightmost side are significant (rule 5). The significant digits are 4.