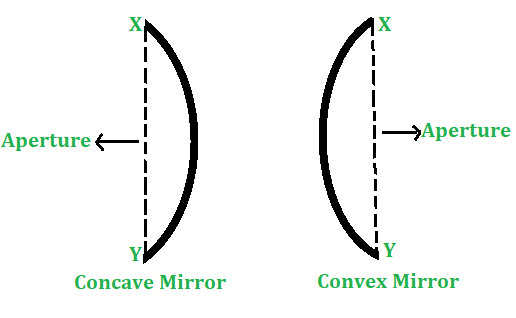 4.  Pole – The centre of the spherical surface is called its pole. It is denoted by P.

5.  Principal axis – The line joining the centre of curvature (C) and pole (P) of a spherical mirror and extended on either side is called the principal axis.

The set of guidelines to set signs for image distance, object distance, focal length, etc for mathematical calculation during an image formation is called the Sign Convention. The sign conventions in case of the spherical mirrors are made in taking consideration that the objects are always placed on the left side of the mirror, such that the direction of incident light is from left to right. The sign conventions followed for any spherical mirror are given as:

1) All distances are measured from the pole of a spherical error. 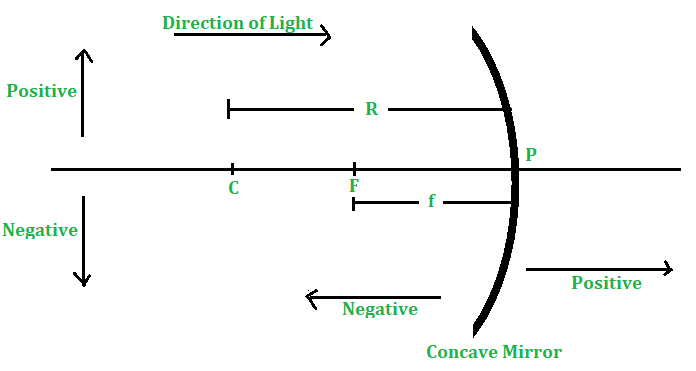 The distance of the position of an object on the principal axis from the pole of a spherical mirror is known as object distance. It is denoted by u.

The distance of the position of the image of an object on the principal axis from the pole of a spherical mirror is known as image distance. It is denoted by v.

The relation between v and f of a spherical mirror is known as mirror formula.

It is given by

Linear magnification has no unit.

Example 1: A concave mirror produces two times magnified real image of an object placed at 10 cm in front of it. Find the position of the image.

Example 2: An object of 5 cm in size is placed at a distance of 20 cm from it concave minor of focal length 15 cm At what distance from the mirror, should a screen be placed to get the sharp image? Also calculate the size of the image.

Determination of the position of image.

So the screen must be placed at a distance of 60 cm in front of the concave mirror.

Determination of size of the image and its nature.

Thus, the size of image -15cm, negative sign with h’ shows that the image is real and inverted.

Example 3: An object 4 cm high is placed at a distance of 6 cm in front of c concave mirror of focal length 12 cm Find the position, nature and size of the image formed.

Sound: It is produced in a material medium by a vibrating source when a material median vibrates it pushes air near it this is called compression (region of high pressure) and when the particle moves backwards it creates a region of low pressure known as rarefaction. due to this compression and rarefaction, sound waves travel. Sound waves required a median to travel material that can be the solid-liquid or the sound speed of sound is highest in solid.

Sound waves can be divided into 3 categories:

The frequency of audible sound is between 20hz-20khz the human ear can hear this sound.

these sound have a frequency of less than 20kz. Elephants and whales can hear this sound

these have a frequency greater than 20khz we cannot detect these sounds built the creatures like dogs, cats bats and mosquitos can hear it.

When a sound wave reaches our ear it is characterised by 3 factors:

The intensity of sound at any point is defined as the amount of energy passing normally per unit area helped around that point per unit time si unit of intensity are watt/m2.

The intensity of sound at any point:

a ) Inversely proportional to the square of the distance of a point from the source.]

b)  directly proportional to the square of the amplitude, sq of frequency and density of the medium.

Unit of loudness is bel

the practical unit of loudness is decibel.

3. Quality: Quality in that characteristic of sound distinguishes between sound produced by two sources having the same intensity and pitch.

the quality of sound wave depends on factors like frequency and relative intensity of over tunes.zStep 1.

Image is formed at a distance of 12 cm  behind the concave mirror as v is positive. Therefore , image is virtual.

Example 4: A convex mirror used in a bus has radius of curvature 3.5 m. If the driver of  the bus locates a car at 10 m behind the bus, find the position, nature and size of the image of the car.

Thus, the car appears to be at 1.5 m from the convex mirror and behind the mirror.

Determination of the size and nature of the image

Since m is positive, so image of the car is virtual and erect (i.e., upright).