A simple approach will be to generate all the subsequences of string S and for each subsequence check if it is present in string T or not. Consider example 2 in which S = “abb”,
its subsequences are “”, ”a”, ”b”, ”ab”, ”bb”, ”abb” each of which is present in “abab”. The time complexity of this solution will be exponential.

Consider two strings S and T of length m and n respectively & let the function to find the shortest uncommon subsequence be shortestSeq (char *S, char *T). For each character in S, if it is not present in T then that character is the answer itself.

Otherwise, if it is found at index k then we have the choice of either including it in the shortest uncommon subsequence or not.

Thus, we can see that this problem has optimal substructure property as it can be solved by using solutions to subproblems.

Following is a simple recursive implementation of the above problem.

If we draw the complete recursion tree, then we can see that there are many subproblems that are solved again and again. So this problem has Overlapping Substructure property and recomputation of the same subproblems can be avoided by either using Memoization or Tabulation. The following is a tabulated implementation of the problem. 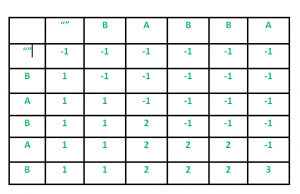