Shell Scripting – How to send Signal to a Processes

Signals allow the operating system to communicate with programs(or processes). We will create an interactive bash script to send signals to a process and observe the status of the process. For demonstration, we will use a program named xlogo to which we will send signals from our bash script. It’s a program that displays the X Window System Logo.

Install xlogo if it is not present in your system

The name of the script will be signals.sh.

Make it an executable file.

Open the file and add the following Script.

It takes the name of a valid process as an argument in the terminal. The input is the signal number. Signals are sent via kill command and the jobs -l print the status of the process. While running the script if we terminate the process, there is an option to restart the process.

Start the script with xlogo as the argument. xlogo process starts running in the background.

Press y to continue or n to exit the script.

Sending SIGSTP signal to process. The corresponding signal number is 19

Signal number 19 corresponds to a signal called SIGSTOP. It kind of pauses or freezes a program. It is used when we want to stop a process but do not want to close it.  The shell prompt returns. The terminal shows the current status of the process.

We can see that the X logo stops resizing when the window is dragged.

xlogo stops working. The logo fails to change size. The process is stopped/paused. 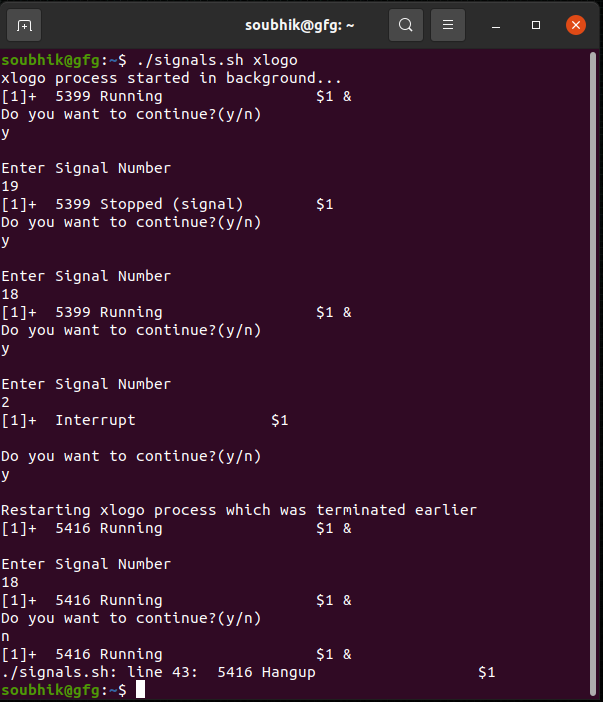 Sending SIGSTOP, SIGCONT, SIGINT and at last SIGHUP signal to the process