The property of a conductor or circuit due to which a change in the flow of electric current produces an electromotive force. The flux of a close wound coil is directly proportional to the linkage current, that is ∅B ∝ I.

For an N-turn closed wound coil, the same magnetic flux is connected across all the windings. As the flux  ∅B through the coil changes, each turn contributes to the induced emf. Therefore, flux linked with the coil (flux linkage) is equal to N×∅B.

The constant of proportionality (I) in the above reaction is called inductance.

Self-inductance is the property of a coil due to which, the coil opposes any change in the strength of the current flowing through it by inducing an emf in itself.

Self-Induction L of a coil depends upon-

Note: Self-induction L does not depend on the current I.

Coefficient of Self-inductance formula: Total flux linked with the coil, N∅ ∝ I 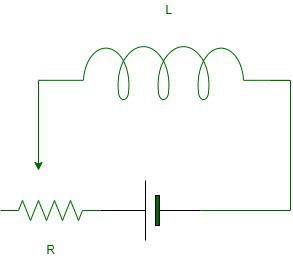 A long solenoid is one whose length is much larger than the radius of the cross-section.

Magnetic flux using every inflexion of the solenoid,

where A  area of all inflexion of the solenoid.

If L is the coefficient of self-inductance of the solenoid, then

From Equations 1 and 2, we get

It gives the self-Inductance of al long solenoid of length l, area of cross-section. A is having a number of turns per unit length equal to N. If the core is of any other magnetic material u is placed, then

The magnitude of emf is given by

Multiplying (I) to both sides, we get

deputize these values in equation 3, we get

This work done in increasing the current flowing through the inductor is stored as the potential energy (U) in the magnetic field of the inductor.

Factors affecting the strength of the magnetic field around a solenoid

Some of the Applications of self-inductance are:

Question 1: What is Inertia of Electricity?

Question 2: Explain why induction coils are made of copper.

The ohmic resistance of an induction coil made of copper will be very low. Due to the change in magnetic flux, a large induced current will be generated in such an inductance, offering considerable opposition to the flow of current due to the applied emf.

Question 3: What factors control the magnitude of emf in an electric circuit?

The magnitude of the induced emf in an electric circuit is proportional to the rate of change of the magnetic flux associated with the circuit.

Question 4: Two circular balls of the same size, one of metal and the other of glass, are allowed to fall freely from the same height above the ground. Which of the two will reach first and why?

The glass bob will reach earlier on the ground as acceleration due to gravity is independent of the mass of the falling bodies. Being an insulator, no induced current is developed in it due to the earth’s magnetic field.

Question 5: How can the self-inductance of a given coil be increased by N number of turns, area, and length/ of cross-section A?

The self-inductance can be increased with the help of electric fields. It does not depend on the current through the circuit but depends upon the permeability of the material from which the core is made up off.