Vectors are represented by line segments that are directed such as, the direction of an arrow marked at one end, which denotes direction and the length of the line segment is the magnitude of the vector. Eg.

It denotes two points A and B, such that the magnitude of the vector is the length of the straight line AB and its direction is from A to B. Here, point A is called the initial point of vector

and point B is called the terminal point(or endpoint).

A vector whose initial and terminal(end) points coincide with each other, is called a zero vector (or null vector), and denoted as

. Zero vector can not be assigned a defined direction as it has zero magnitude. Or, in other words, it may be defined as having any direction.

A vector whose magnitude is unity (=1) is called as unit vector. The unit vector

Two or more vectors having the same initial point or starting point are called coinitial vectors.

If two or more vectors are parallel to each other, irrespective of their magnitudes and directions. Then they will be called collinear vectors.

have the same magnitude and direction regardless of the positions of their initial points will be called as equal vectors, and it can be represented as

Negative of a Vector

) but the direction is opposite to that of it(initial and terminal points are reversed), is called negative of the given vector.

is negative of the vector

is having O as the initial point and P as its terminal point is called the position vector of the point P with respect to O. 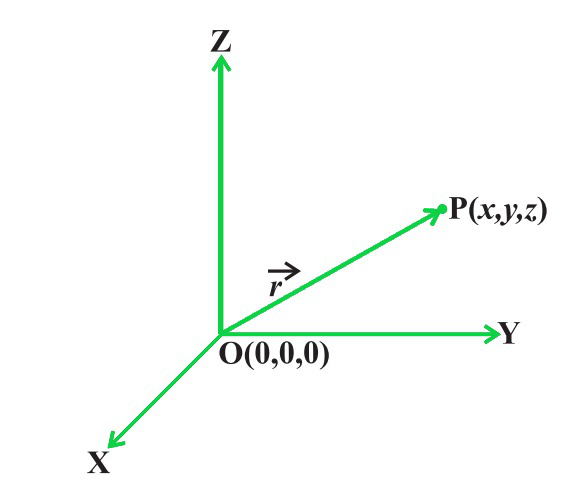 Using the distance formula, the magnitude(or length) of

Note: The vector’s definition defined above are such type of vectors that can be subjected to its parallel displacement without changing its magnitude and direction. Such vectors are called free vectors.

simply denotes the displacement of anything from point A to point B.

Consider a situation that a person moves from A to B and then from B to C. The net displacement made by the person from point A to point C, is given by the vector and expressed as 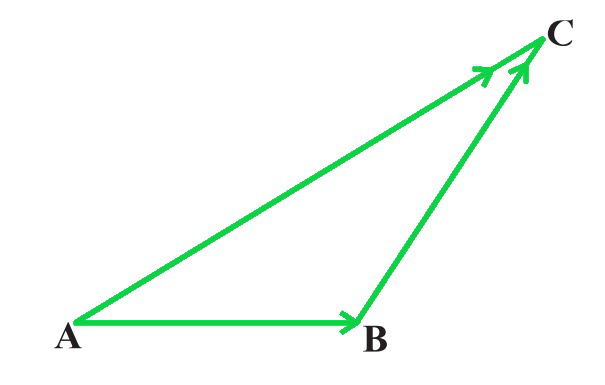 This is known as the triangle law of vector addition.

When the sides of a triangle are taken in order, then it leads to zero resultant(no displacement result) as the initial and terminal points get coincided with each other.

are represented in magnitude and direction by the two adjacent sides of the parallelogram, then their sum( 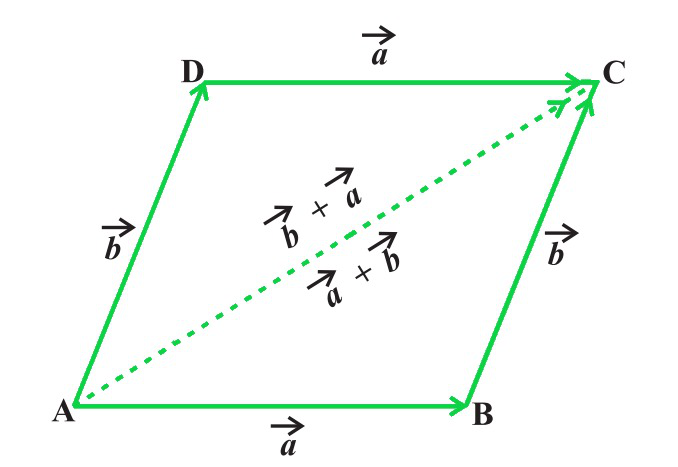 then by using the triangle law of vector addition, from triangle ABC, we have

Now, as the opposite sides of a parallelogram are equal and parallel

Again using triangle law of vector addition, from triangle ADC, we have

is not equal to the sum of the magnitude(length) of

Using triangle law, from triangle PQR, we have

Using triangle law, from triangle QRS, we have

Using triangle law, from triangle PRS, we have

Using triangle law, from triangle PQS, we have

, show that the points P, Q and R are collinear.

Using, converse of triangle law of addition of vectors, we get

ae either parallel or collinear. But, Q is a point common to them.

Problem 2: B, P, Q, R and A are five points in a plane. Show that the sum of vectors 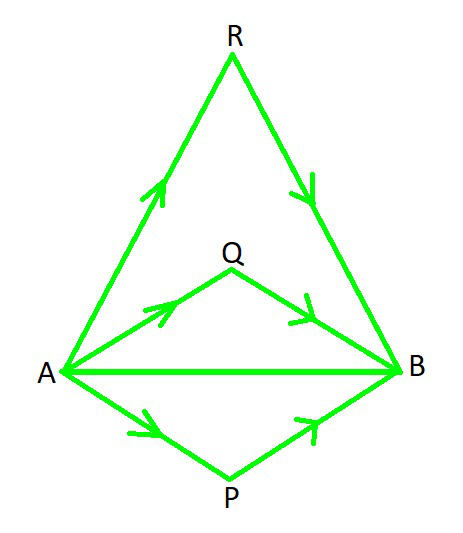 Hence, the sum of the vectors is 3

Problem 3: Let O be the centre of a regular hexagon CDEFAB. Find the sum of the vectors 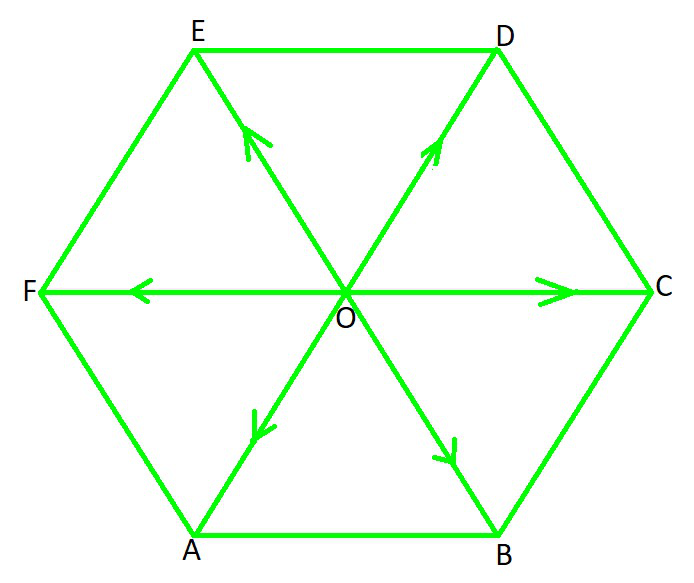 As hexagon property states that, the centre of a regular hexagon bisects all the diagonals passing through it.

Here, the points P and Q are the two points represented by the position vectors

, respectively, with respect to the origin O. Then the line segment joining the points P and Q can be divided by a third point, here we say R, in two ways as follows:

Here, we intend to find the position vector

for the point R with respect to the origin O. We take the two cases one by one. 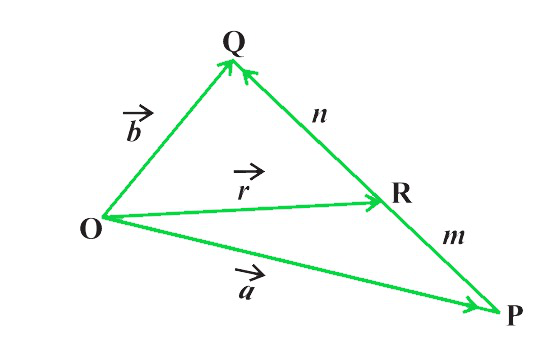 where m and n are positive values, we specify that the point R divides

internally in the ratio of m : n.

When R is the midpoint PQ 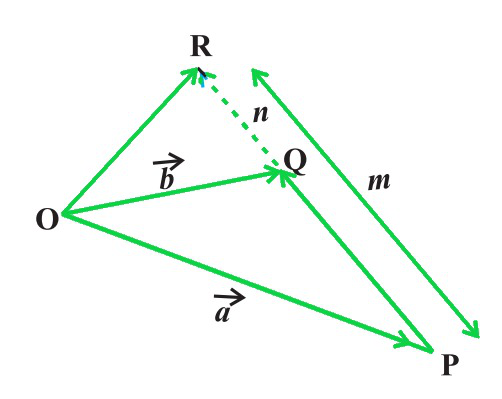 where m and n are positive values, we say that the point R divides

externally in the ratio of the m : n.

internally and externally in the ratio 2 : 3.

Now, we can clearly see that Q is the mid-point of PB.

Apply mid-point section formula we have,

Problem 3: If D is the mid-point of the side BC of a triangle ABC, prove that 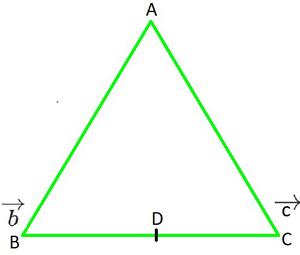 As D is the mid-point of BC.

Applying mid-point section formula, we get

Components of a vector 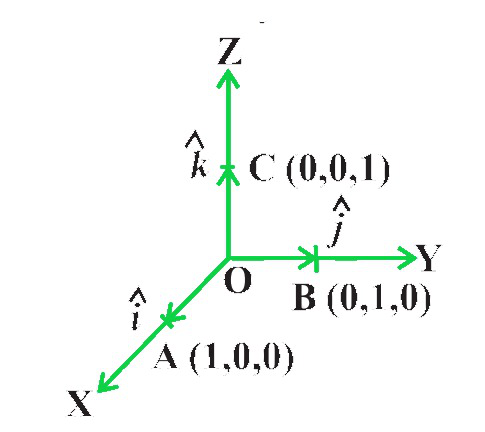 are having magnitude unity or 1, which are called unit vectors along the axes OX, OY and OZ, respectively, and denoted by 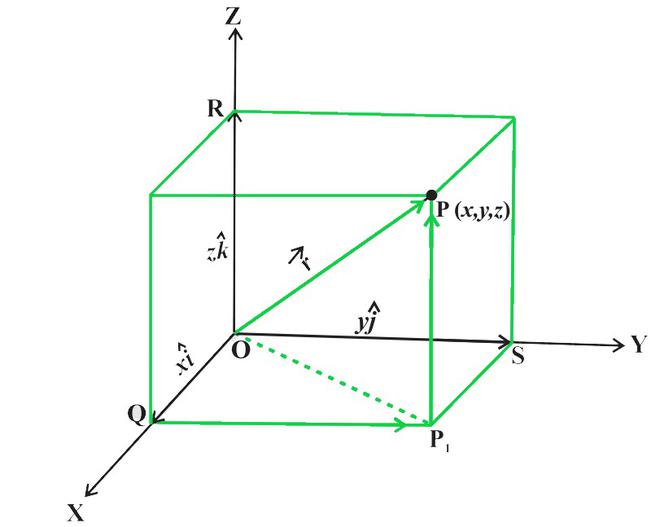 Hence we see that P1P is parallel to z-axis. As

are the unit vectors along the axes x, y and z, respectively, and by the definition of the coordinates of P, we have

Using triangle law, from triangle OQP1, we have

Using triangle law, from triangle OP1P, we have

Hence, the position vector of P with reference to O is as follows:

The length of vector

and in the right-angled triangle OP1 P, we have

Hence, the length of vector

are two vectors as

The multiplication of vector  by any scalar k is given by

Joining the points P and Q with the origin O, and applying triangle law, from the triangle OPQ, we have 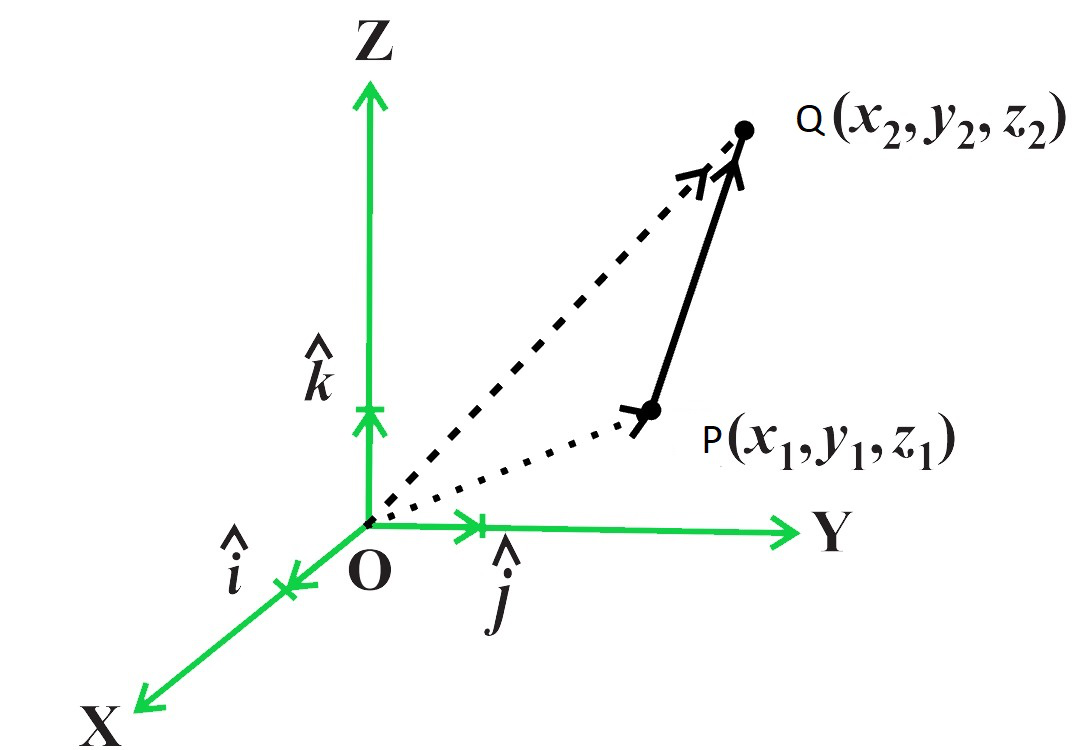 Using the properties of vector addition, the above equation become

Hence, the magnitude of

Problem 1: Find the value of x, y and z so that the vectors

Problem 2: Find the magnitude of the vector

Problem 3: Find the unit vector of given vector as

Problem 4: Find the unit vector of given vector as

Problem 5: Show that the vector

As, we can see 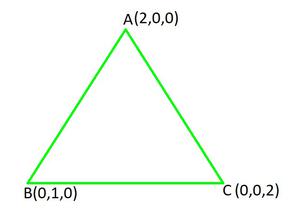