The direction of heat transmission and the efficiency of heat engines are constrained by the second law of thermodynamics. The first rule of thermodynamics says that the universe’s energy stays constant, even though energy may be transferred across systems and environments but not generated or destroyed.

We never seem to get any younger. Despite how much we want we could. We clean our rooms once and then they become filthy again in no time. Certain things only operate one way and not the other. The second law of thermodynamics is the criterion for determining if a process is feasible. The first and second principles of thermodynamics must be satisfied for a process to take place. But what exactly does it say? Let’s look at it more.

If you’ve ever dropped a glass and watched it shatter, you know there’s no way of getting the unbroken glass back. This is the concept of irreversibility. According to the second rule of thermodynamics, heat energy cannot be transferred from a lower temperature to a higher temperature without the addition of energy. This is why operating an air conditioner for an extended length of time is expensive.

According to the second rule of thermodynamics, any spontaneously occurring event will always result in an increase in the universe’s entropy. In basic terms, the law states that the entropy of an isolated system will never decrease over time.

The overall entropy of a system and its surroundings remains constant in some instances where the system is in thermodynamic equilibrium or going through a reversible process. The Law of Increased Entropy is another name for the second law.

It’s difficult to turn all of the heat emitted by a heated body into work. The working material of a heat engine absorbs heat from a hot body, transforms a portion of it into work, and returns the remainder to the cold body. No engine can transform all of the heat from the source into work without wasting any heat. This indicates that a sink is required to get continuous work.

It is impossible to build a technology that can transmit heat from a colder body to a warmer body without wasting any energy. In other words, the refrigerator will not work unless the compressor is powered by an external source. Clausius’s assertion is used by heat pumps and refrigerators.

A refrigerator, for example, can transfer a certain amount of heat from a cold body to a hot one without requiring any external energy. As a result, Clausius’ assertion is violated. Assume that an engine operating between the same hot and cold bodies absorbs heat from the hot body, transforms a portion W into work, and then transfers the remaining heat to the cold body.

The engine does not break the second law of thermodynamics on its own. When the engine and the refrigerator operate together, they create a mechanism that absorbs all of the heat from the hot body and transforms it into work without sacrificing any of the cold body’s heat. The Kelvin-Planck assertion is violated. As a result, we may conclude that the two versions of the second law of thermodynamics are equivalent in every way.

Equation of Second Law of Thermodynamics

The second law of thermodynamics is expressed mathematically as;

Here, ΔSuniv is a change in the universe’s entropy.

Let’s look at the definition of entropy and how it relates to the second rule of thermodynamics. The entropy of a system is defined as the number of changes it has undergone from its prior condition to its current state. As a result, entropy is usually expressed as a change in the entropy of the system indicated by ∆S. If the value of entropy at a given state of the system must be measured, then the previously chosen state of the system is assigned a value of zero entropy.

Causes of entropy increase of the closed system: 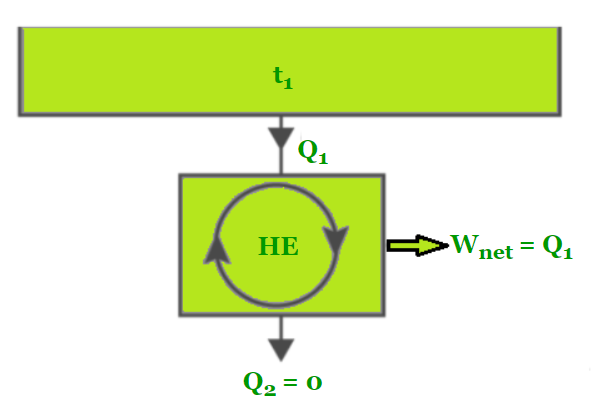 To create work in a cycle, a heat engine must interact with at least two thermal reservoirs at different temperatures. Motive power may be generated as long as there is a temperature differential. The heat engine will create work until the temperature of the two bodies is equalised if the bodies with which it exchanges heat have limited heat capacity. 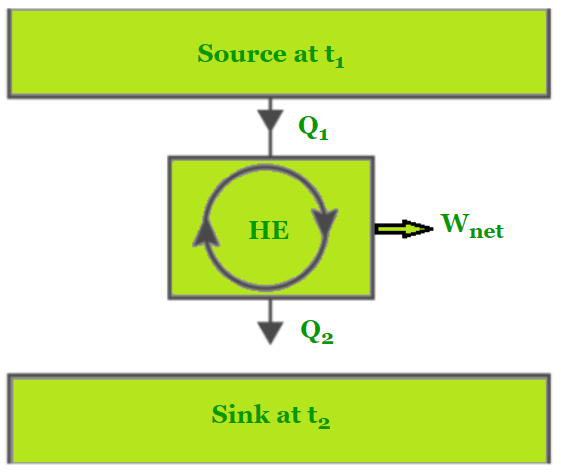 Hence, the heat delivered to the higher temperature reservoir is 700 J.

Question 2: What does the second law of thermodynamics imply?

It is impossible to convert all heat into labour, i.e., 100 % efficiency is impossible since it would result in a negative change in the entropy of the universe, which violates the Second Law of Thermodynamics.

Question 3: For the conversion of heat into work, a sink, or a mechanism that rejects heat, is required. Which law is the above inference based on?

For the conversion of heat into work, a sink, or a mechanism that rejects heat, is required. Otherwise, the universe’s entropy will not change in a beneficial way. According to the second rule of thermodynamics, this is required.

Question 4: State the second law of thermodynamics in terms of entropy.

The second Law of Thermodynamics in terms of entropy can be stated as:

Every spontaneous or natural change increases the entropy of the cosmos. Heat movement in a system is always naturally from a higher temperature to a lower temperature. It is impossible for heat to move from a lower-temperature system to a higher-temperature one. All of the heat provided to the system in a cyclic process cannot be turned to work.

Question 5: Give few examples of the second law of thermodynamics.

Few examples of the second law of thermodynamics are given as: