By the time of the invention of the computer by Charles Babbage, technology had evolved and advanced in a very significant manner. This advancement in technology and the development of computers is grouped in different generations. Each generation of computers has some significant change in their feature and much more advantage than the previous generation of computers. So, it can be said that a generation can be referred as an change and advancement in technology. Basically there are five generations of computers listed below and they differ from each other in terms of architecture, occupying space , language, specification , function or operation performed, etc.

1. First Generation of Computers(1940 – 1956): The period from 1940-1956 was the period of first-generation computers. They are basically based on vacuum tubes, and vacuum tubes are used as the basic components for memory and circuitry for CPU (Central Processing Unit). For e.g., UNIVAC-1 And ENIVAC

4. Fourth Generation of Computers(1972 onward): VLSI (Very Large Scale Integrated) Circuit or they are also known as microprocessors are used in Fourth generation computers. Microprocessor chip is made up of thousands of Integrated Circuits build on a single silicon chip. The use of Personal Computer(PCs) increased in this generation and First Personal Computer (PC) was developed by IBM. For e.g., Apple, CRAY-1, etc. 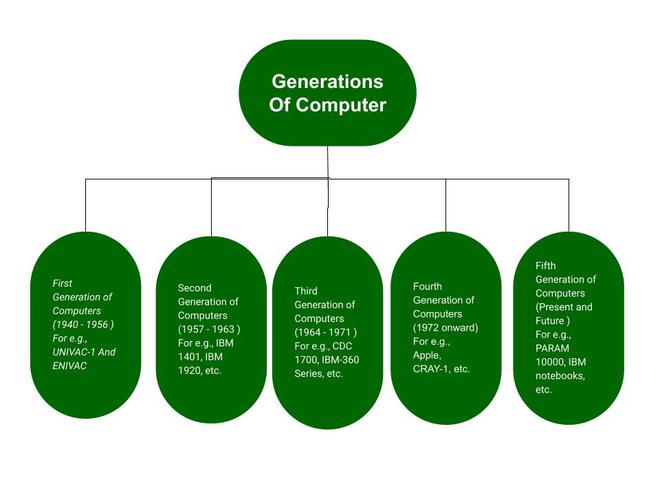 Now we will discuss the second generation in detail:

Characteristics of the second generation of computer are:

Question 1: Which of the following replaced Vacuum tubes in second generation computers?

Question 2: Which language is used for programming in second generation computers?

The correct option is B, i.e., Assembly language

Question 3: Who invented the computer?

Question 4: Which of the following are the advantages of transistors over vacuum tubes?

The correct option is D, i.e., All of the above

Question 5: What was the duration or period of the second generation of computers?

(D) none of the above

My Personal Notes arrow_drop_up
Previous
Computer Memory
Next
Angular 10 NgTemplateOutlet Directive
Recommended Articles
Page :
Classification of Computers
07, Sep 18
How to Connect Two Computers with an Ethernet Cable?
05, May 20
How to uniquely identify computers visiting web site in JavaScript?
14, Jul 20
Types of Computers
01, Jun 21
Basic Applications of Computers
01, Jun 21
Generations of Computers - Computer Fundamentals
16, Feb 21
History of Computers
25, Jun 21
Java Program to Implement Inversion Method for Random Number Generation
22, Jun 21
Java Program to Implement Park-Miller Random Number Generation Algorithm
13, Dec 20
How to Create a Random Graph Using Random Edge Generation in Java?
04, Dec 20
First Generation Of Computer
11, Jan 21
Java Program to Implement the Linear Congruential Generator for Pseudo Random Number Generation
14, Dec 20
Python – The new generation Language
14, Oct 15
What is a Next generation Firewall?
20, Aug 21
Python program to sort a list of tuples by second Item
22, Oct 18
Python program to find second maximum value in Dictionary
12, Dec 18
How to set indent the second line of paragraph using CSS ?
22, Apr 20
Find the largest and second largest value in a Linked List
23, Apr 20
What is MIPS(Million of Instructions Per Second)?
01, May 20
How to merge the first index of an array with the first index of second array?
08, Jun 20
Second Order Derivatives in Continuity and Differentiability | Class 12 Maths
25, Nov 20
Newton's Second Law of Motion
15, Jun 21
How to check first number is divisible by second one in JavaScript ?
31, Mar 21
How to find the sixth cell (second row and third column ) of a 3x3 table in jQuery ?
15, Apr 21
Article Contributed By :