Here, we will discuss different concepts such as namespace, scope, and LEGB rule in Python.

What are Namespaces in Python

A python namespace is a container where names are mapped to objects, they are used to avoid confusion in cases where the same names exist in different namespaces. They are created by modules, functions, classes, etc.

What is Scope in Python

A scope defines the hierarchical order in which the namespaces have to be searched in order to obtain the mappings of name-to-object(variables). It is a context in which variables exist and from which they are referenced. It defines the accessibility and the lifetime of a variable. Let us take a simple example as shown below:

The above program gives different outputs because the same variable name pi resides in different namespaces, one inside the function print_pi and the other in the upper level. When print_pi() gets executed, ‘inner pi variable‘ is printed as that is pi value inside the function namespace. The value ‘outer pi variable‘ is printed when pi is referenced in the outer namespace. From the above example, we can guess that there definitely is a rule which is followed, in order in deciding from which namespace a variable has to be picked.

In Python, the LEGB rule is used to decide the order in which the namespaces are to be searched for scope resolution. The scopes are listed below in terms of hierarchy(highest to lowest/narrowest to broadest): 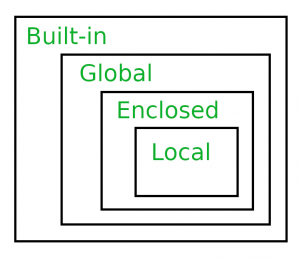 Local scope refers to variables defined in the current function. Always, a function will first look up a variable name in its local scope. Only if it does not find it there, the outer scopes are checked.

On running the above program, the execution of the inner function prints the value of its local(highest priority in LEGB rule) variable pi because it is defined and available in the local scope.

Local and Global Scopes in Python

If a variable is not defined in the local scope, then, it is checked for in the higher scope, in this case, the global scope.

Therefore, as expected the program prints out the value in the local scope on the execution of inner(). It is because it is defined inside the function and that is the first place where the variable is looked up. The pi value in global scope is printed on the execution of print(pi) on line 9.

When outer() is executed, inner() and consequently the print functions are executed, which print the value the enclosed pi variable. The statement in line 10 looks for variable in local scope of inner, but does not find it there. Since pi is referred with the nonlocal keyword, it means that pi needs to be accessed from the outer function(i.e the outer scope). To summarize, the pi variable is not found in local scope, so the higher scopes are looked up. It is found in both enclosed and global scopes. But as per the LEGB hierarchy, the enclosed scope variable is considered even though we have one defined in the global scope.

The final check can be done by importing pi from math module and commenting on the global, enclosed, and local pi variables as shown below:

Since, pi is not defined in either local, enclosed or global scope, the built-in scope is looked up i.e the pi value imported from the math module. Since the program is able to find the value of pi in the outermost scope, the following output is obtained,

Previous
numpy.mirr() in Python
Next
How to select multiple columns in a pandas dataframe
Related Articles
1. Python | Scope resolution when a function is called or defined
2. Python | Pandas TimedeltaIndex.resolution
3. Method resolution order in Python Inheritance
4. Finding the Size Resolution of Image in Python
5. Change image resolution using Pillow in Python
6. How to change video resolution in OpenCV in Python
7. Namespaces and Scope in Python
8. Python | Accessing variable value from code scope
9. Python Scope of Variables
10. PyQt5 QCalendarWidget - Getting Horizontal Resolution
Article Contributed By :