Schiper Eggli Sandoz Protocol is used to maintain the causal ordering of the messages i.e. the message which is sent first should be received first. This is the contrast to maintaining a vector clock based on the number of messages sent to each type of process, this protocol’s vector clock can be increased at any rate it chooses and is unrelated to the number of messages that are currently outstanding.

1. Any type of message cannot be delivered if it is preceded by a message which is mentioned in the list of timestamps.

2. Alternately, there are following actions may be taken to convey a message: 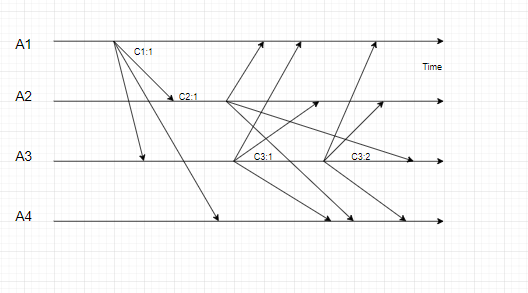 Some main advantages of using this protocol in the design of distributed systems are as  follows:

Some main Disadvantages of using this protocol in the design of distributed systems are as  follows: