Scaffolding an ExpressJS app from scratch

Scaffolding is creating the skeleton structure of application. It allows users to create own public directories, routes, views etc. Once the structure for app is built, user can start building it. Express is the open source web development framework for Node.js for building web applications and the APIs. To install express in the Node.js environment use the NPM (Node Package Manager).

To use express in the Node, use the following syntax:

Prerequisites: Node.js should be installed beforehand. Use the link to learn about prerequisites: https://www.geeksforgeeks.org/nodejs-connect-mongodb-node-app-using-mongoosejs/. Getting Started: Using express-generator package to install ‘express’ command line tool. express-generator is used to create the structure of application.

1. Navigate to the folder where app is to be built out using the terminal.

2. Now in the terminal, install express-generator using the following command. 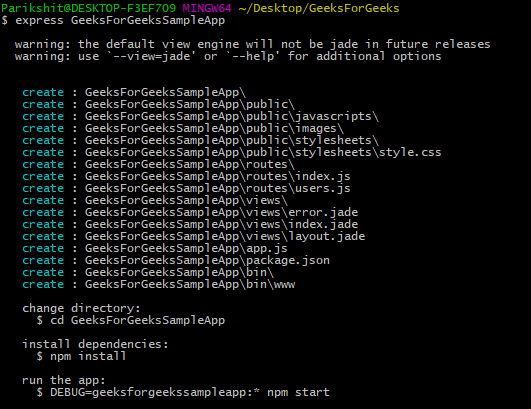 The GeeksForGeeks sample application that was scaffolded constitutes the image. Various files and folders likes routes, public, package.json etc. can be seen

Explanation: Explaining the files/folders in project.

1. bin: The file inside bin called www is the main configuration file of our app.

2. public: The public folder contains the files which are to be made public for use like JavaScript files, CSS files, images etc.

3. Routes: The routes folder contains files which contain methods to help in navigating to different areas of the map. It contains various js files.

4. views: The view folder contains various files which form the views part of the application.

Note: The extension of the files at the time of writing this article is .jade. Change these file extensions to .pug as the jade project has changed to pug.

5. app.js: The app.js file is the main file which is the head of all the other files. The various packages installed have to be ‘required’ here. Besides this, it serves many other purposes like handling routers, middle-wares etc.

6. package.json: package.json file is the manifest file of any Node.js project and express.js application. It contains the metadata of the project such as the packages and their versions used in the app (called dependencies), various scripts like start and test (run from terminal as ‘npm start’), name of the app, description of the app, version of the app, etc.

Running the Scaffold app: Install all the dependencies mentioned in the package.json file required to run the app using the following command:

After the dependencies are installed, run the following command to start the ExpressJs app:

Previous
How to create a To-Do list using Drag and Drop in Angular 7 ?
Next
Sum of an array using MPI
Related Articles
1. Laravel | Front-end Scaffolding
2. ASP.NET MVC Scaffolding
3. How to Dockerize an ExpressJS App ?
4. Building a react boilerplate from scratch without using create-react-app
5. How to redirect to generated URL with ExpressJS?
6. Routing Path for ExpressJS
7. ExpressJS vs NestJS - 5 Differences That You Should Know
8. HandleBars Templating in ExpressJS
9. How to run ExpressJS server from browser ?
10. How to do Templating using ExpressJS in Node.js ?
Article Contributed By :