The maximum amount of solute that can be dissolved in a solvent at a specified temperature can be termed as a saturated solution. A solution cannot dissolve any more solute further upon reaching saturation. The undissolved substances remain at the bottom. The point at which the solute stops dissolving in the solvent is termed the saturation point.

Following are the examples of Saturated Solutions:

A solute must be added to a solvent in order for a solution to form. At first, the solute dissolves in a solvent and forms a homogeneous solution. A solution in which solutes dissolve is referred to as an unsaturated solution. A solution is made up of two types of particles: solutes and solvents. Water is commonly used as a solvent (which is one of the reasons why water is also called the universal solvent).

As a result, all solutions are considered to be largely unsaturated in nature before being transformed into saturated solutions by adding solute to them. The amount of solute that is contained in lesser amounts than the maximum value, that is before the solution reaches the saturation level is called an unsaturated solution. No remaining substances leave at the bottom, that is, all the solute is dissolved in the solvent. An unsaturated solution is basically a chemical solution that has a solute concentration lesser than its corresponding equilibrium solubility.

Following are the examples of Unsaturated Solutions:

Interconversion of Saturated and Unsaturated Solution 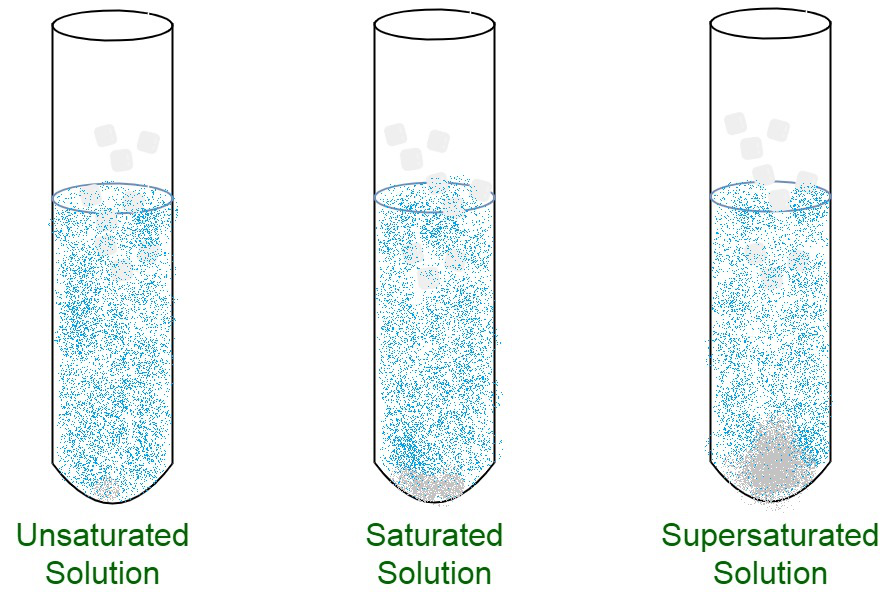 The amount of the solute present in the saturated solution at the given temperature can be termed as the solubility of the solute in the solvent.

The maximum amount of a solute that can be dissolved in 100 gm of a solvent. Different solutes possess varying different solubilities. Solubility increases with an increase in temperature. In the case of saturated solutions, the solute concentration is equivalent to the equilibrium solubility. The solubility of a substance depends on the solvent. It is observed that sugar dissolves in water but not in oil.

Effect of Temperature and Pressure on Solubility

Problem 1: A solution is formed by dissolving 20g of sodium chloride in 180 g of water as solvent. Compute the concentration of the solution.

Concentration of solution is given by,

Problem 2: How to identify whether the solution is saturated or not?

Problem 3: How can you create a saturated solution?

Following are the steps to create a saturated solution:

Problem 4: Give some outdoor examples of saturated solutions.

Some of the outdoor examples of saturated solutions are:

Problem 5: Give one example to show a solution that can be unsaturated, saturated, and supersaturated at different intervals of time.

Considering a soda bottle can show that a solution can be unsaturated, saturated, and supersaturated at different intervals of time. Before opening the soda bottle, the solution is supersaturated, On opening the bottle, the excess dissolved carbon dioxide escapes from the surface resulting in the formation of bubbles. This is a saturated solution. When left for a large amount of time, the soda water goes flat and turns into an unsaturated solution.