Millions of people use computers while on go, from the truly mobile situations with a wireless device in moving cars, to nomadic situations in which laptop computers are used in a series of a different location. We use the term mobile hosts to mean either category, as distinct from stationary hosts that never move. The mobile hosts introduce a new complication to route packets to the mobile hosts, the network first has to find it.

The model of the world that we will consider is one in which all hosts are assumed to have a permanent home location that never changes. Each host has a permanent home address that can be used to determine home location. Like the telephone number 1-212-5551212 indicates the United States (country code 1) and Manhattan (212).

The message is shown with a dashed line in the figure indicate that it is a control message, not a data message. The sender sends a data packet to the mobile host using its permanent address. This packet is routed by the network to the host home location because the home addresses belong there. It encapsulates the packet with a new header and sends this bundle to the care-of address. This mechanism is called tunneling. It is very important on the internet, so we will look at it in more detail later. 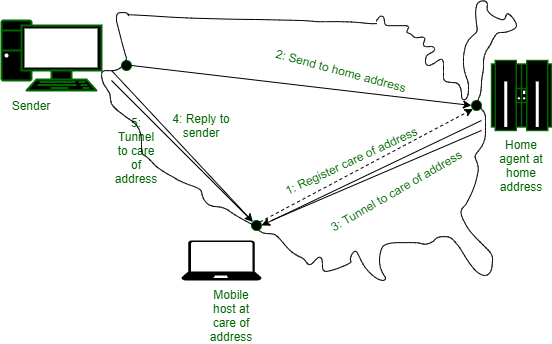