A root is a piece of a vascular plant typically present under the ground. Its essential functions include jetty of the plant, ingestion of water and disintegrated minerals and conduction of these to the stem, and capacity to hold food varieties. The root contrasts from the stem principally by lacking leaf scars and buds, having a root cap, and having branches that start from inner tissue as opposed to from buds.

Various other particular roots exist among vascular plants. Pneumatophores, generally found in mangrove species that fill in saline mud pads, are horizontal roots that develop vertically out of the mud and water to work as the site of oxygen admission for the lowered essential underground root growth. The underlying foundations of specific parasitic plants are exceptionally adjusted into haustoria, which implant into the vascular arrangement of the host plant to take care of the parasite. 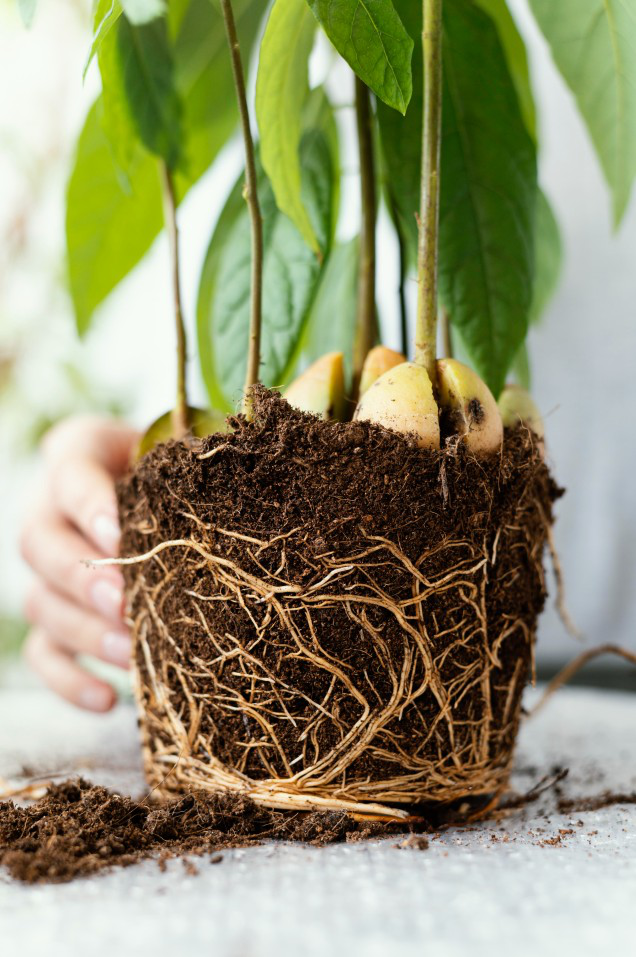 Establishes fill long just from their closures. The actual tip of the root is covered by a thimble-formed root cap, which protects the developing tip as it clears its path through the dirt. Apical meristem is present directly under the root cap, a tissue of effectively partitioning cells. A portion of the cells created by the apical meristem are added to the root cap, yet the majority of them are added to the area of extension, which lies simply over the meristematic district.

Differences between monocot and dicot roots

This sort of underground root growth is present in monocotyledonous plants. In monocot plants, the essential root is fleeting after germination. This is supplanted by an enormous number of roots and every one of them rises up out of the foundation of the stem. Such roots comprise the stringy root foundation, for example, wheat, paddy, grass, and so on.

Sometimes, roots emerge from some other plant parts (other than radicle). Such roots are called extrinsic roots. When a structure is framed coincidentally or in a surprising area, such a design is called unusual. Unusual roots are utilized for different purposes, like a vegetative spread, mechanical help, and so on.

Roots fill different roles that are essential for the endurance of the plants. They are a vital or incorporated framework that helps the plant in:

The root is covered at the tip by a thimble-like design. This is known as called a root cap. The root cap protects the delicate root zenith when it clears its path through the dirt.

This area lies a couple of millimeters over the root cap. This is the district of meristematic action. The cells in this district are tiny and have a slender divider and thick cellular material. Since this is the meristematic area, the cells partition quickly.

This area lies over the locale of meristematic movement. The cells close to this district go through quick extension and growth. These cells are answerable for the development of roots long.

In banyan trees, hanging uncovers come from branches. The hanging roots then go into the dirt to offer extra help to the gigantic banyan tree. Such roots are called prop roots. If there should be an occurrence of a maize plant, uncovers rise up out of the lower hub of the stem and go into the ground. Such roots are called brace roots and offer extra help.

In plants that fill in swamps, many roots come out upward over the ground. These are empty roots are called pneumatophores. They work with the trade of gases in the roots. Due to waterlogging in swamps, it is beyond the realm of possibilities for roots to inhale air. Pneumatophores make up for this deficiency and permit the trade of gases. Rhizophora is a tree of mangrove timberland, which shows the presence of pneumatophores.

Question1:  What are the various kinds of root morphology?

Question 2:  What are the Characteristics of roots?

Qualities of the Root

Question 3: What are fundamental pieces of root?

Portions of a root incorporate the essential root, horizontal

Question 4:  What are the Characteristics of morphology?

Morphological Traits: changes to the presentation of a creature as well as the structure and construction of inside parts, similar to bones and organs. Model: Snowshoe bunny is more than arranged for the colder time of year climate with enormous back feet for simple travel and a white coat for cover.

Question 5: What are the two fundamental kinds of root foundation?

Question 6:  What is the distinction between taproot and fibrous root?