COVID-19 has impacted the whole world in many ways forcing us to stay indoors, preventing social interactions, changing the way many businesses, educational institutions, companies work – but there is also another virus that’s made of 0’s and 1’s that has been spreading, infecting many computer systems causing issues and outages to many industries on a significant scale, and it is Ransomware. 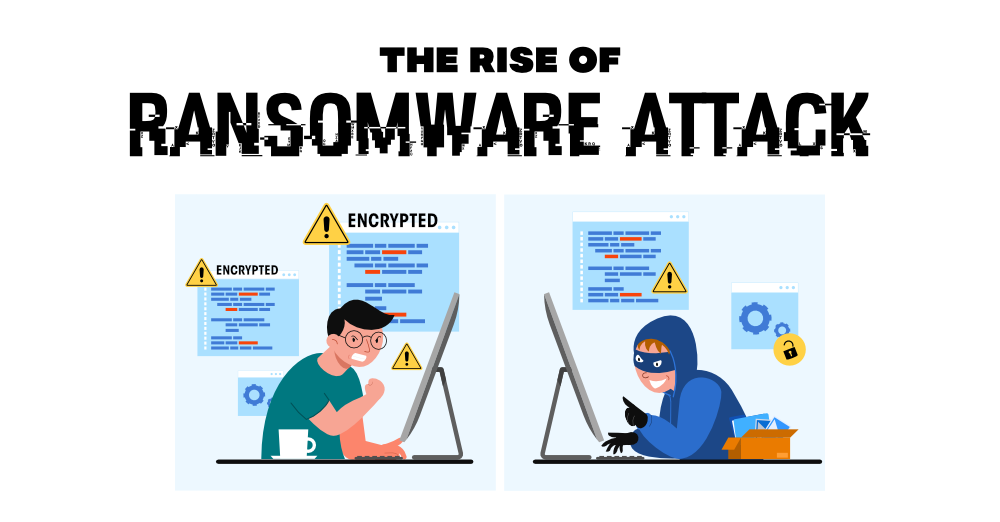 Ransomware is a type of malware that blocks access to systems and data unless a ransom is paid. It encrypts the victim’s files, drives making them inaccessible, and demands a ransom payment to decrypt them in Bitcoin and other cryptocurrencies making tracing and prosecuting the offenders difficult. In a properly implemented ransomware attack, recovering the files without the decryption key is very hard and time-consuming.

How does Ransomware work?

Ransomware rarely infects systems directly, It is generally accompanied by other malware types like Trojans and Worms. After ransomware starts running it begins encrypting all the files, data on the drives preventing its access, and any other operations on the data. The process of file-encrypting ransomware, also called cryptoviral extortion, was invented by two researchers Young and Mordechai M. Yung at Columbia University. Cryptoviral extortion works by following a 3 round protocol carried out between the attacker and the victim:

There has also been an increase in Ransomware as Service operators in recent days. Since its operation as a service is getting popular making more systems vulnerable even if the primary offender may not be that technically knowledgeable.

Ransomware on the Rise

The increase in Ransomware attacks is been caused by dependency on the digital world due to the Pandemic. The sudden increase in Internet usage for almost everything like health, education, work, connecting to friends and family, and relying on services that are yet to be secure. Ransomware forces the victim to pay ransom sooner when compared to other cyberattacks because it restricts access to data. According to Reuters, more than 1500 organizations have fallen victim to Ransomware attacks. Disrupting services like Health services in Ireland and Pipeline systems in the US forces the companies to pay the ransom to restore the services sooner. Ransomware has been on the rise since the WannaCry worm in 2017 affecting Windows systems. Ransomware doesn’t attack directly so if any other malware has been made into your system you might expect a ransomware infection too.

The increase of Ransomware as Service operators, increase in Cloud services also helped in the growth of these attacks. The attack vector and the victims have tripled in 2020-21 when compared to 2015-16. The amount of ransom also increased from a few thousand dollars to tens of millions. The usage of cryptocurrencies also helped the offenders to receive the ransom in a simple and easy way

There are many companies that suffered Ransomware Attacks in 2020-21, here are the few notable attacks

Protecting Yourself from Ransomware

My Personal Notes arrow_drop_up
Previous
Role of Blockchain in Sustainable Development
Next
Best Jamstack or Static Site Hosting Providers
Recommended Articles
Page :
Top 8 Video Call Apps That Become Popular During Covid19 Pandemic
08, Jul 20
Technologies Being Used to Counter the Covid19 Pandemic
14, Jun 20
How to Deal With Layoffs During Coronavirus Pandemic?
23, Jun 20
Placement Tips for Students Who Graduate During COVID-19 Pandemic
11, Apr 21
Microsoft Healthcare Bot During Covid19
05, Jun 20
How to Deal with the Changed Scenario of Jobs and Careers After COVID-19 Pandemic?
11, Sep 20
How to Answer Covid-19 Pandemic Related Interview Questions?
30, Jun 21
How is COVID19 Crisis Affecting the Traffic on Online Platforms?
05, Jun 20
What is WannaCry? How does WannaCry ransomware work?
08, Jun 17
Difference between Spyware and Ransomware
16, Sep 20
Difference between Rootkit and Ransomware
11, Sep 20
Ransomware Explained: How It Works And How To Prevent It
23, Jul 21
Google’s method for preventing Phishing attacks
13, Aug 18
How to Prevent Small Businesses From Cyber Attacks?
07, Jul 21
Types of Phishing Attacks and How to Identify them
20, Oct 21
Impact of Network Attacks on Operations of an Organization
18, Feb 22
Web Server and its Types of Attacks
13, Mar 22
How to Reduce Risk of Exposure to CSRF, XSRF, or XSS Attacks?
28, Mar 22
GraphQL - Attacks and Security
19, Apr 21
Types of Cyber Attacks
17, Oct 20
How to Protect Yourself From Cyber Attacks?
06, Oct 19
Introduction to Password Attacks | Ethical Hacking
05, Feb 21
Bring Out The Geek In You During COVID-19 Outbreak
19, Mar 20
5 Ways to Maintain the Security During Work From Home
03, Apr 20
Article Contributed By :