Hash Function is a function that has a huge role in making a System Secure as it converts normal data given to it as an irregular value of fixed length. We can imagine it to be a Shaker in our homes. When we put data into this function it outputs an irregular value. The Irregular value it outputs is known as “Hash Value”. Hash Values are simply numbers but are often written in Hexadecimal. Computers manage values as Binary. The hash value is also a data and are often managed in Binary.

RIPEMD(RACE Integrity Primitives Evaluation Message Digest) is a group of hash function which is developed by Hans Dobbertin, Antoon Bosselaers and Bart Preneel in 1992. The development idea of RIPEMD is based on MD4 which in itself is a weak hash function. It is developed to work well with 32-bit processors.Types of RIPEMD:

It is a sub-block of the RIPEMD-160 hash algorithm. The message is processed by compression function in blocks of 512 bits and passed through two streams of this sub-block by using 5 different versions in which the value of constant ‘k’ is also different. 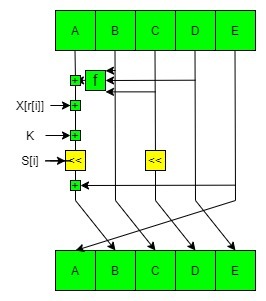 In the above example, the new() constructor takes the algorithm name as a string and creates an object for that algorithm. Then the update() method takes a binary string so that it can be accepted by the hash function. The x() hash function encodes it and then using hexdigest(), hexadecimal equivalent encoded string is printed.

Example 2: Let’s see if we want to find the byte representation of the encoded hash value.