Context Managers are the tools for wrapping around arbitrary (free-form) blocks of code. One of the primary reasons to use a context manager is resource cleanliness. Context Manager ensures that the process performs steadily upon entering and on exit, it releases the resource. Even when the wrapped code raises an exception, the context manager guarantees the exit. So, without any procrastination, lets dive and acquire the new mantra for resource cleanliness without the code repetition. 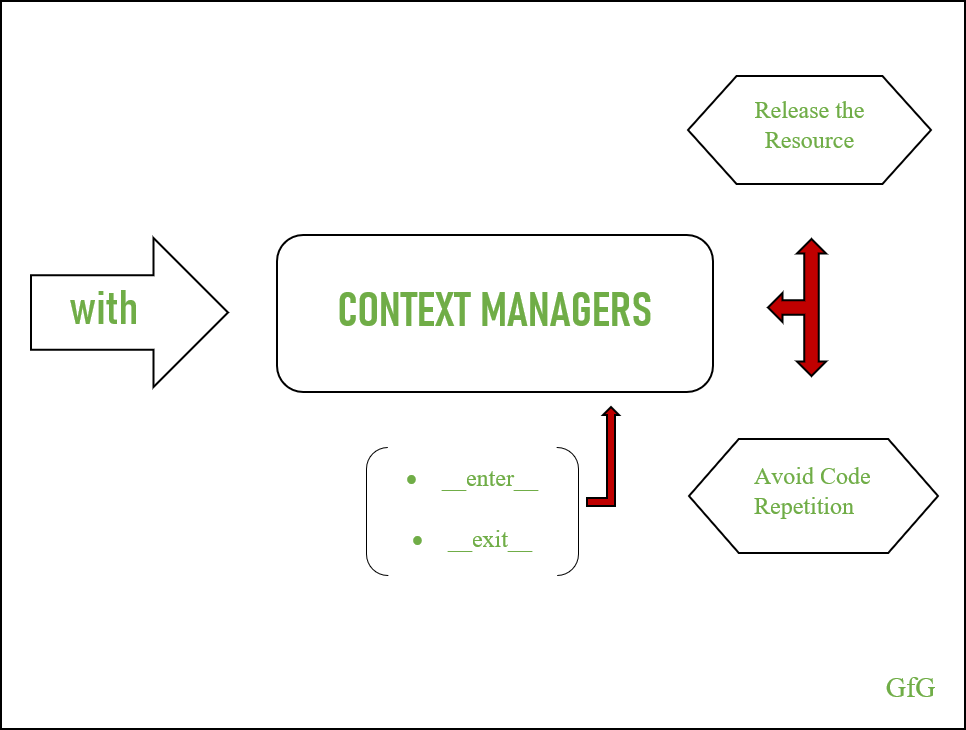 Note: Knowledge about Decorators and Generators is appreciated

As we all know, the proper way to release the resource is by closing the resource after its use. And the most common practice followed to structure the close function is by using Exception Handling. Let’s look into the below code.

The finally clause ensures that the file will be closed irrespective of any situation. But this process results in code repetition. So, how you achieve the same using Context Manager without the boilerplate setup. Let’s go through the below sections one by one:

with statement, the python built in function can be used as a context manager.

This code performs the same functionality of what we developed using exception handling. Here the with statement is expected to return an object with two magic methods: __enter__ and __exit__. The result returned from __enter__ method is assigned to the variable mentioned after the `as` keyword.

It handles if an exception is raised within the wrapped code and most importantly the statement ensures that the resource is released. So, the programmers need not perform the close operation. Here is the full code.

The enter and exit method

The __enter__ method returns an object, and then the returned value is assigned to the variable mentioned after the `as` keyword. Other than self argument it takes no other arguments.
On the other hand, the __exit__ method takes 3 positional arguments other than self argument. By default, these three arguments are none and are populated with information when the wrapped code raises an exception.

How the exception is handled using the Context Manager?
Using the __exit__ method, the context manager handles exceptions that are raised by the wrapped code. __exit__ method has 3 positional arguments:

By default, all three values are None. When an __exit__ method receives an exception, the method can handle the exception in 2 different ways:

The __exit__ method can re-raise the exception by having a return statement that returns False. Let’s see the below code:

The __exit__ method can suppress the exception by returning true. See the below example for detailed understanding.

When you should write Context Managers

Implementing a Context Manager as a Class

A sample method that writes to a file using Context Manager. Here is the full code.

Here the page.close() will be called after completion of reading the page (upon exit from the with block).

Using a Context Manager as a function Decorator and Generator

With the python contexlib module, you can implement context manager as decorator and the yield statement within the method gives the flexibility to use it as a generator. To understand this program, you should have prior knowledge about decorators and generators.

Here @contextmanager wraps the open_file method. When the function open_file gets invoked, the __enter__method of the context manager executes and pass the control to open_file method where the file opens and yield the file reference to callable with open_file('sample.txt') as f and the execution halts before executing the finally block.

Once the code within the with statement is executed, it passes the control back to the open_file and the execution begins from where it is halted. In this case, the finally block executes and closes the file. Upon completion of execution, the __exit__ method is called and it handles any exception that is raised by the wrapped code.

Handling exception by checking instance of an Exception Class

Context managers ensure resources are released properly and the way it’s structured provides the flexibility of re-using the exception handling code at different places and hence avoid code repetition. Context managers are used for wrapping arbitrary blocks of code. However, a Context Manager can be used as a decorator, which avoids the need for writing a Context Manager and a Decorator separately for certain tasks.