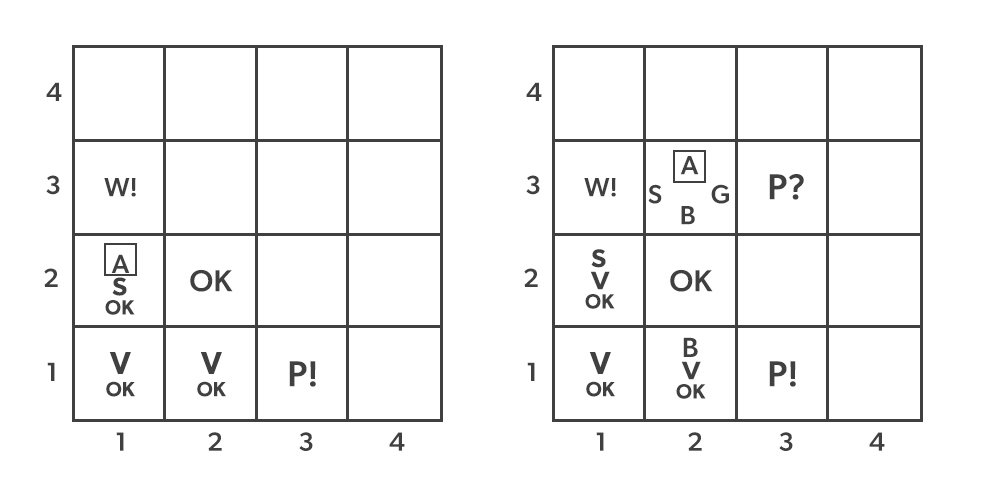 In the wumpus universe, we start with a simplified version of the resolution rule. Take a look at the steps that led up to the figure above – the agent travels from [2,1] to [1,1], then to [1,2], where it smells a stink but notices no breeze. The following information has been added to the knowledge base:

where each l is a literal and l and m are complimentary literals (In other words, negation).

As a result, the unit resolution rule creates a new clause from a clause (a disjunction of literals) and a literal. A single literal, often known as a unit clause, can be understood as a disjunction of one literal.

The full resolution rule can be generalized to

are complementary literals. This means that when two clauses are resolved, a new clause is created that contains all of the literal from the two original clauses save the two complimentary literals.

There is one additional technical feature to the resolution rule: each literal should only appear once in the resultant clause. Factoring is the process of removing numerous copies of literal. For example, resolving

, which may be simplified to just A.

, which is complementary to the literal

in the other sentence, to determine how sound the resolution rule is. If

is false, and so

must be true, since

must be true because l1lk is supplied. Now, because it can be true or false, one of these conclusions must be true—exactly as the resolution rule requires.

The resolution rule is even more startling because it is the foundation for a family of full inference methods. A resolution-based theorem proving can determine if

in propositional logic for any statement

. The following two subsections describe how resolution does this.