A view function, or view for short, is simply a Python function that takes a Web request and returns a Web response. This article revolves around how to render an HTML page from Django using views. Django has always been known for its app structure and ability to manage applications easily. Let’s dive in to see how to render a template file through a Django view.

Illustration of How to render a HTML Template in a view using an Example. Consider a project named geeksforgeeks having an app named geeks.

After you have a project and an app, open views.py and let’s start creating a view called geeks_view which is used print “Hello world” through a template file. A django view is a python function which accept an argument called request and returns an response.
Enter following code into views.py of app

but this code won’t work until into define a proper mapping of URL. Mapping means you need to tell Django what a user enters in the browser to render your particular view. For example www.geeksforgeeks.org tells django to execute its home page view. So let’s modify urls.py to start our view.
Include your app’s urls into main urls by adding following code to geeksforgeeks > urls.py

Now lets create a path to our view from geeks > urls.py

Done. Now go to check if our template gets rendered or not. visit here – http://localhost:8000/ 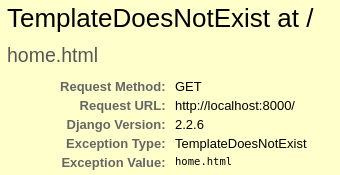 It is giving an error that you don’t have a template home.html. So let’s create our template now, in geeks folder create a folder called templates and create a file home.html into it. Now let’s check again – http://localhost:8000/.

We used this error because during your process of learning on how to create a project using django? you may encounter a lot of errors, there you dont need to hyper, just take a long breath and simply google the error you will have solution to everything.