Remote Method Invocation (RMI) is an API that allows an object to invoke a method on an object that exists in another address space, which could be on the same machine or on a remote machine. Through RMI, an object running in a JVM present on a computer (Client-side) can invoke methods on an object present in another JVM (Server-side). RMI creates a public remote server object that enables client and server-side communications through simple method calls on the server object.

Stub Object: The stub object on the client machine builds an information block and sends this information to the server.

The block consists of

Skeleton Object: The skeleton object passes the request from the stub object to the remote object. It performs the following tasks

The communication between client and server is handled by using two intermediate objects: Stub object (on client side) and Skeleton object (on server-side) as also can be depicted from below media as follows: 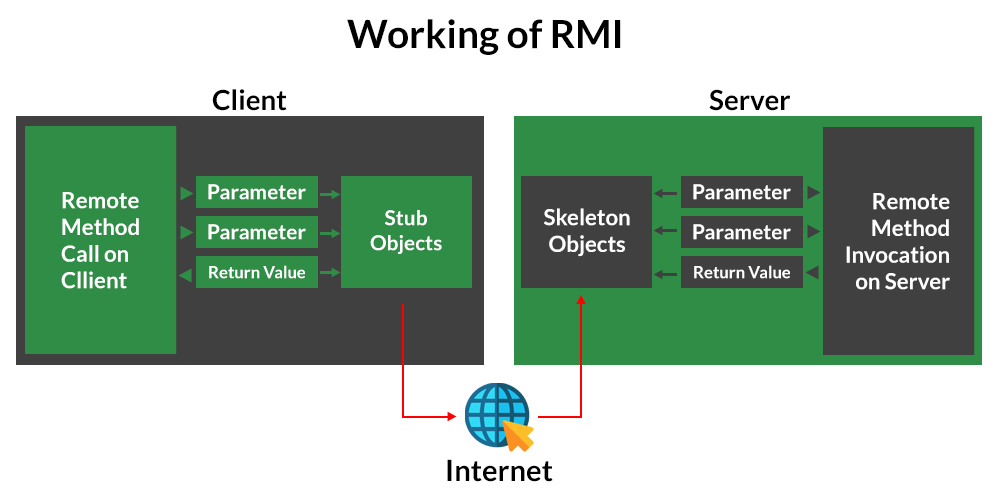 These are the steps to be followed sequentially to implement Interface as defined below as follows:

Step 3: Creating Stub and Skeleton objects from the implementation class using rmic
The rmic tool is used to invoke the rmi compiler that creates the Stub and Skeleton objects. Its prototype is rmic classname. For above program the following command need to be executed at the command prompt
rmic SearchQuery.
Step 4: Start the rmiregistry
Start the registry service by issuing the following command at the command prompt start rmiregistry
Step 5: Create and execute the server application program
The next step is to create the server application program and execute it on a separate command prompt.

save the files respectively as per class name as

This article is contributed by Aakash Ojha. If you like GeeksforGeeks and would like to contribute, you can also write an article and mail your article to review-team@geeksforgeeks.org. See your article appearing on the GeeksforGeeks main page and help other Geeks. Please write comments if you find anything incorrect, or you want to share more information about the topic discussed above.