Let us suppose we are travelling on a Bus, let’s say, another bus overtakes us. We will not feel the actual speed of the overtaking bus, as felt by a person who looks it, standing by the side of the road. If both the buses are moving at the same speed in the same direction, a person in one bus observes a person in the other bus at rest, even though both are in motion. If both buses are in the opposite direction, then the passengers observe a greater speed, greater than their individual speed. In all these situations, we measure the relative velocities. Thus,

In Mathematics, the relative velocity is the vector difference of the velocities between the two bodies.

What is Relative Velocity? 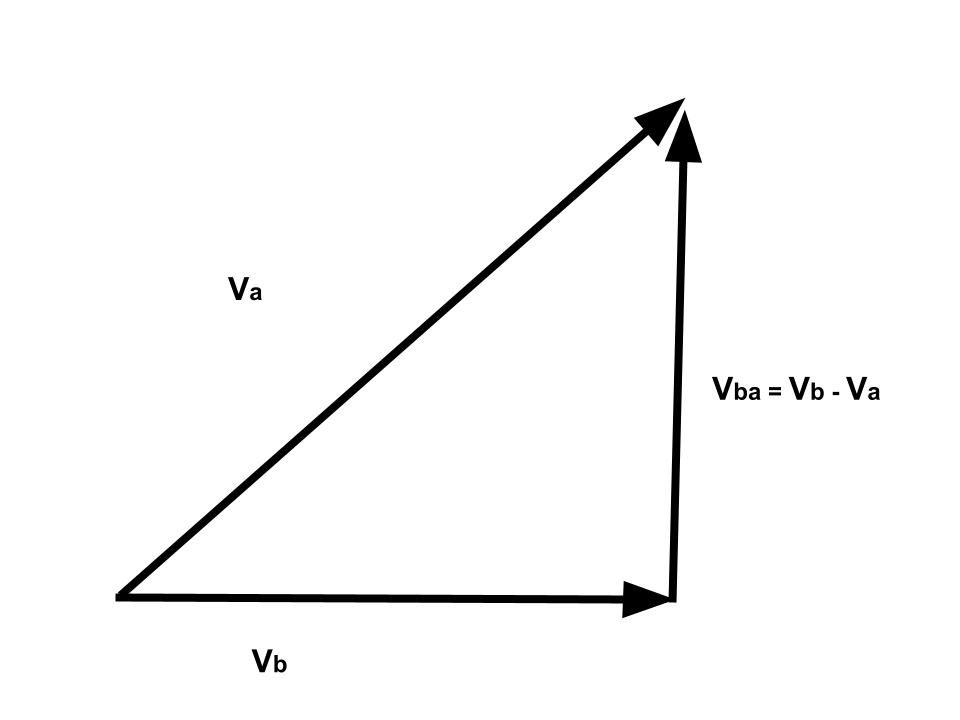 If Va and Vb represent the velocities of two bodies A and B respectively at any instant, then, the relative velocity of A with respect to B is represented by Vab.

Similarly, the relative velocity of B with respect to A is given by,

Henceforth, the magnitude of both relative velocities are equal to each other. 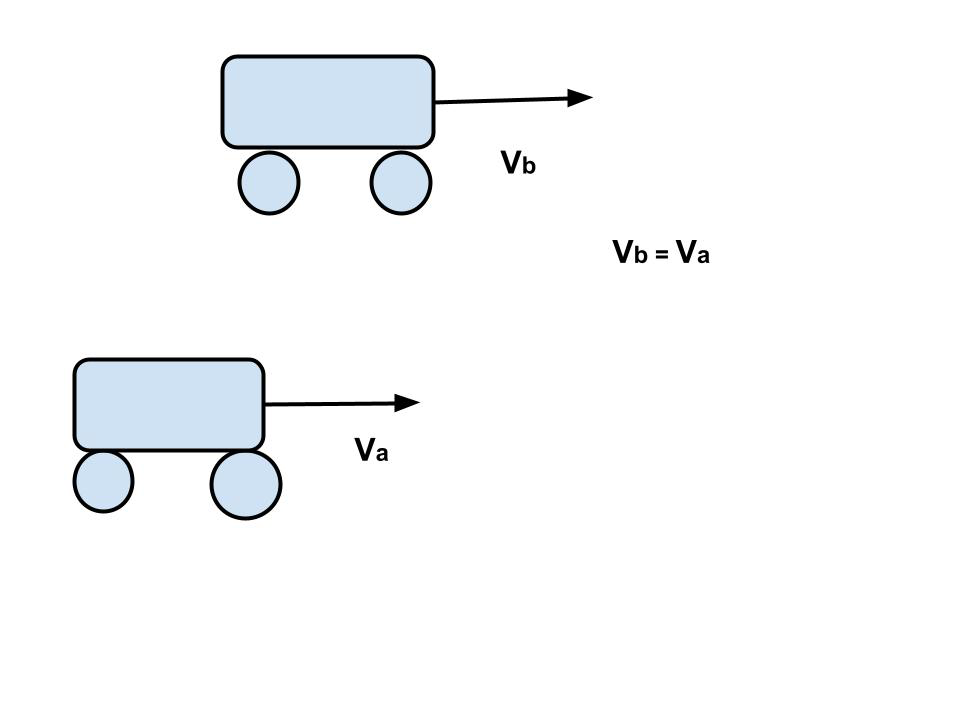 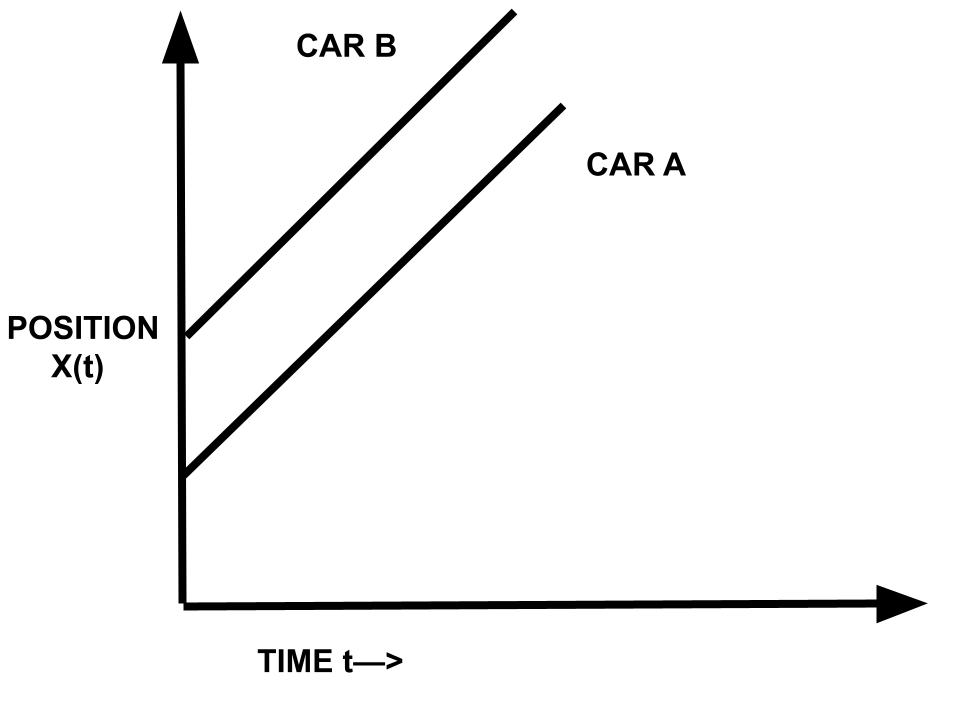 Let’s now consider four different cases regarding relative motion. In the first case let us suppose two cars A and B are moving in the same direction with equal velocities (Va = Vb). For a person seated in A, the car B would appear to be at rest, if he forgets for a moment the fact that he himself is in motion. Hence the velocity of B relative to A is zero.

Similarly, in the case of a person seated in car B and observing car A. The relative velocity of A with respect to B is also zero.

So, if Vb – Va  = 0, means the two cars are moving in the same direction and are keeping the same distance between them always. So their position-time graphs are two parallel straight lines.

Case 2: Relative velocity for two objects starting from the same point and moving in the same direction with unequal velocities. 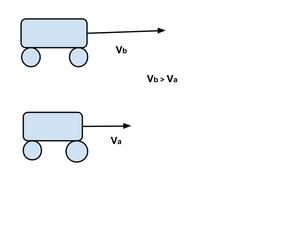 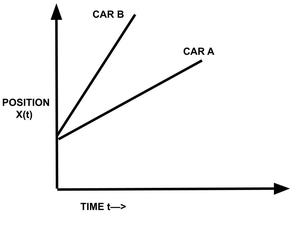 In this case let Car A is moving with a velocity Va and Car B,(starting from the same point or X1(0)=X2(0) ), be moving with a greater velocity Vb in the same direction. Then, the person in car A feels that bus B is moving away from him with velocity,

And for an observer in car B, car A appears to go back with a velocity,

Case 3: Relative velocity for two objects starting from different positions and moving in the same direction with unequal velocities 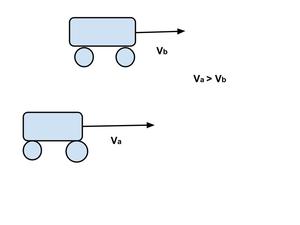 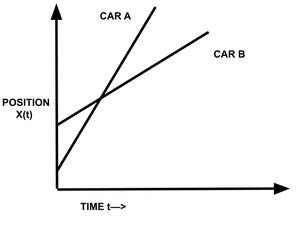 Here, Va> Vb. If car A which is having the higher velocity and moving behind the car B, then car A will overtake the car B at some instant and the position-time graphs of the two cars will intersect at a point 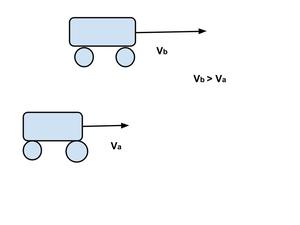 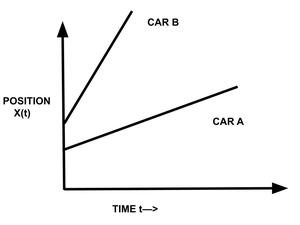 And Vb > Va. If the car with greater velocity(in this case car B) is moving ahead, there is no chance of overtaking the other car A and hence the position-time graphs will not intersect, both the lines move far from each other as shown in the graph

Clearly, If Vb – Va ≠ 0, means the two cars are moving with unequal velocities. Their position-time graphs are straight lines inclined to the time axis and one of them will be steeper than the other.

Case 4: Relative velocity for two objects moving in the opposite direction 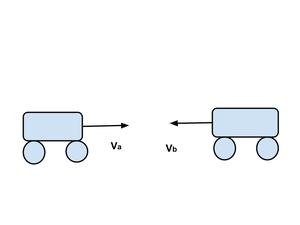 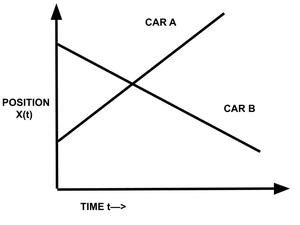 If both the cars are moving in opposite directions as shown in the figure, the relative velocity of Vba or Vab will be

It means, when two cars A and B are moving in opposite directions each seems to go very fast relative to the other.

As both the buses are moving in opposite direction, so relative velocity is:

Problem 2: Two trucks, standing a few distances apart, start moving towards each other with speeds 1 m/s and 2 m/s along a straight road. What is the speed with which they approach each other?

Let us consider that “A” denotes any truck at rest, “B” denotes first truck and “C” denotes second truck. The equation of relative velocity for this case is : 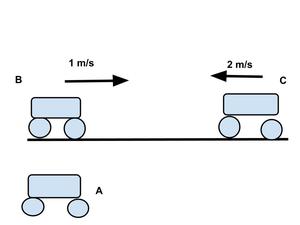 Problem 3: Two cars, initially 900 m distant apart, start moving towards each other with speeds 1 m/s and 2 m/s along a straight road. When would they meet?

Let us consider that the direction V1 is moving in a positive direction.

This means that car “2” is approaching car “1” with a speed of -3 m/s along the straight road.

Similarly, car “1” is approaching car “2” with a speed of 3 m/s along the straight road. Therefore,

So can say that two cars are approaching at a speed of 3 m/s. Now, let the two cars meet after time:

Problem 4: How long will a girl sitting near the window of a train travelling at 36 km h-1 see a train passing by in the opposite direction with a speed of 18 km/h? The length of the slow-moving train is 90 m.

Problem 5: A girl, moving at 3 km/hr along a straight line, finds that the raindrops are falling at 4 km/hr in the vertical direction. Find the angle with which raindrop hits the ground.

Let the girl be moving in the x-direction. Let us also denote girl with “A” and raindrop with “B”. we need to know the direction of raindrop with respect to ground=Vb. 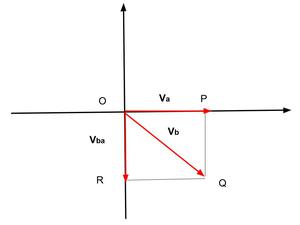 In ΔOQR, Angle with which rain drop hits the ground = ∠QOR = θ 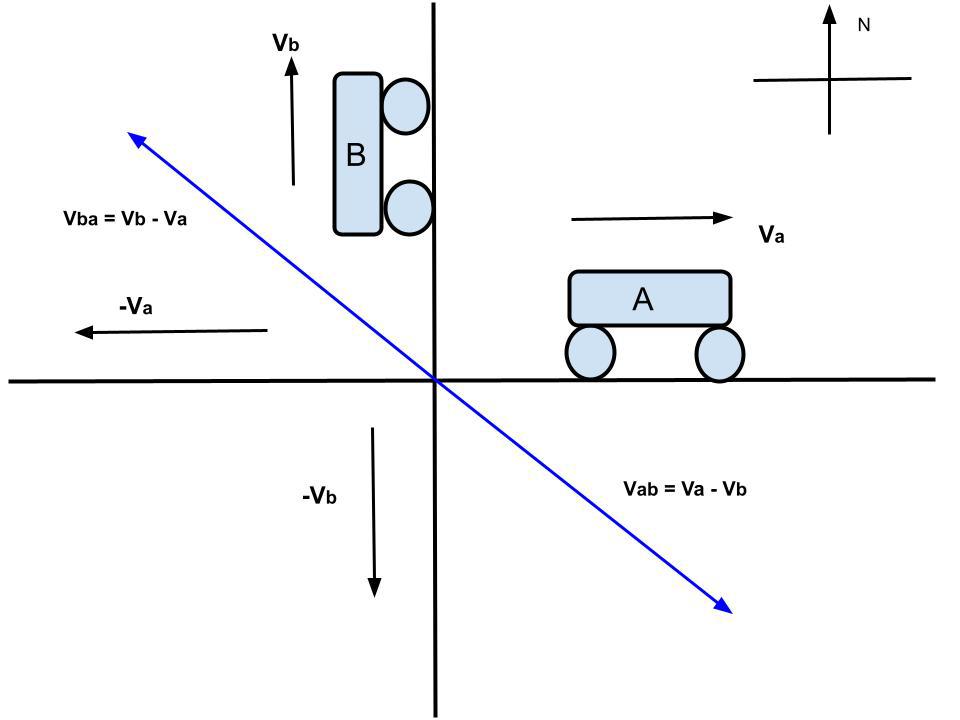 Similarly, relative velocity Vab of Bus-A with respect to Bus-B is towards the south of east direction as shown in the figure, so: