Relationship between Planning and Controlling

Managerial Control implies the measurement of accomplishment against the standard and the correction of deviations to assure attainment of objectives according to plans.

Planning is a blueprint of the course of action to be followed in the future. It is also a mental exercise that requires imagination, foresight and sound judgment. It is thinking before doing. It is a preparatory step, and it refers to detailed programs regarding the future course of action. In fact, it is the basic management functions that involve forecasting, laying down objectives, analyzing the different courses of action, and deciding the best alternative of those to perform different managerial functions to achieve pre-determined goals. Thus, it is a continuous process that involves decision-making, i.e., deciding the course of action for framing and achieving objectives.

Planning is deciding in advance what to do, how to do it, when to do it, and who is to do it. Planning bridges the gap from where we are to where we want to go. It makes it possible for things to occur which would not otherwise happen.

Relationship between Planning and Controlling 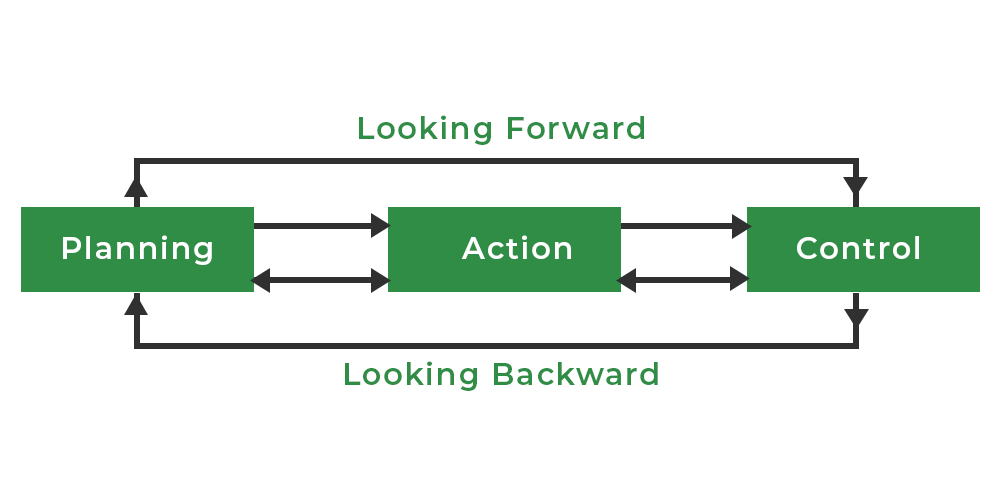 1. Both Planning and Controlling are Interrelated and Interdependent

Controlling is based on planning. If an organisation does not plan its objectives in advance, it will not have any basis or planned performance to compare the actual performance with. Therefore, to perform the controlling process it is essential to first perform the planning process.

Planning without control is meaningless and control without planning is blind.

2. Planning is Prescriptive and Controlling is Evaluating

Hence, it can be said that the controlling process starts where the planning process ends.

Therefore, planning and controlling are both forward-looking as well as backward looking.