By seeing the common optical phenomena that surround us, we may conclude that the light seems to travel in straight lines. Sometime in the 20th century, the wave theory of light often became slightly inadequate for cases of the interaction of light with matter, and light often behaves somewhat like a stream or system of particles. This discussion about the true nature of light continued for years till a modern quantum theory of light came in which light is neither a become slightly wave nor a ‘particle’ in nature – the new theory relates the particle properties of light with the wave nature of it. The refraction of light is explained briefly using the straight-line propagation of light in this article.

Change of Speed changes the Direction of light that travels through the medium: 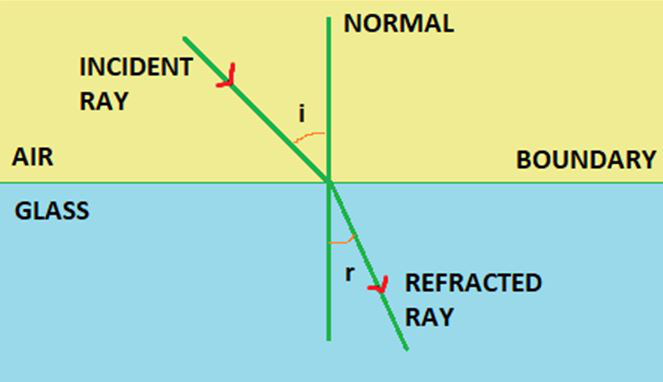 Refraction of light in glass is described in the figure given above. When a light ray travels from air into the glass, the light slows down gradually and changes its direction slightly. When the light ray travels from a less dense substance to a denser substance, the refracted light bends or deviates more towards the normal imaginary line. If the light wave falls on the boundary in a direction that is perpendicular or at right angles to it, the light ray doesn’t suffer refraction in spite of the change in its speed.

The refraction of light travelling through different mediums follows some laws. There are two laws of refraction as stated below which at the sight of refraction, the light follows, and we see the refracted image of the object.

Where i= angle of incidence, r= angle of refraction, the constant value depends on the refractive indexes of the two mediums. It is their ratio.

Applications of Refraction of Light

Refraction has many wide and common applications in optics and also in technology. A few of them are given below:

Refractive index also called the index of refraction enables us to know how fast light travels through the material medium.

The given velocities of light in different media can give the refractive index by the following also where the first medium is not vacuum:

Based on the given refractive index of the material or medium, the light ray either changes its direction, or it bends at the junction which separates the two given media. If the light ray that travels from a certain medium to another of a slightly higher refractive index, it bends towards the normal in that case when travelling from rarer to a denser medium, or else it bends away from the normal when traveling from denser to rarer medium.

Light rays after passing from air to glass are refracted. By utilizing special types of spherical lenses, which are mainly concave or convex, the light rays passing from air to the lens in turn, are either diverged from the surface or converged from the surface of the lens. Lenses are used in telescopes and microscopes. They are also required in cameras and for projectors. Our own eyes have a convex lens and so are an example of a spherical lens. At first, the image is inverted, but when the optical nerves in the blind spot transfer the impulses to the brain it processes it, and we perceive the image in its correct orientation. Important terms related to refraction through lenses: 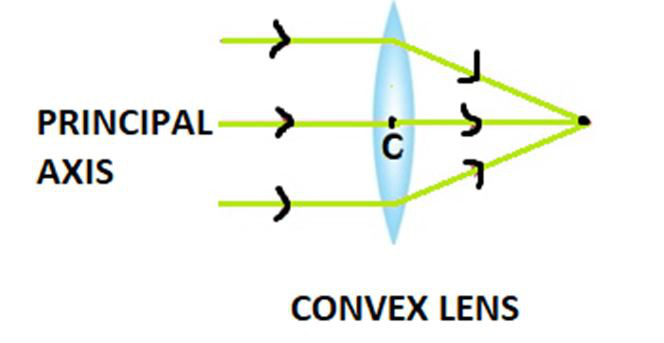 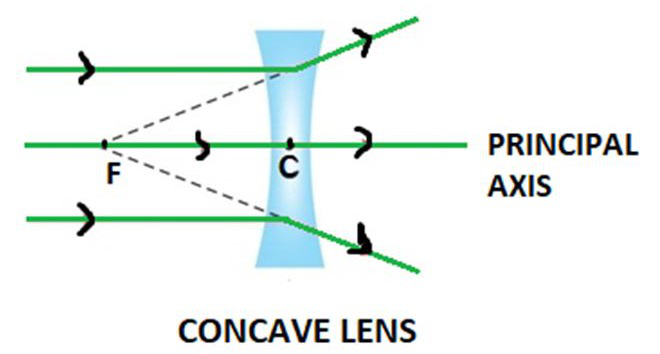 As we can observe below, the refraction through a glass slab takes place at the two parallel and equal and opposite surfaces. As we can see the incident ray first undergoes refraction at the PS surface and the refracted ray bends towards the normal and again it is incident on the other surface which is equal to the first one and that is QR. Through a glass slab, the light before coming back to the air suffers refraction two times. At the second time, the refracted ray bends away from the normal. If the light is incident at right angles then it will pass through the glass slab without any deviation. 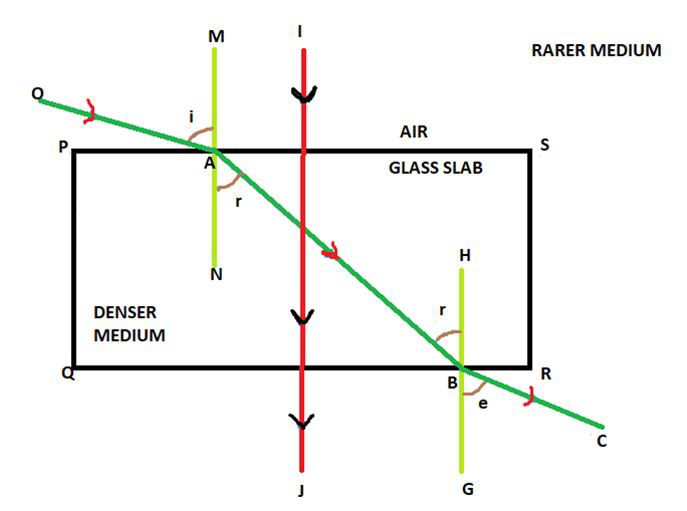 Question 1: What is the constant value if the angle of incidence is 22° and the angle of refraction is given to be15°?

Question 2: What is the constant value if the angle of incidence is 30° and the angle of refraction is given to be 46°?

Question 3: What is the value of the sin of the angle of incidence if the angle of refraction is given to be sin 35°? The constant is mentioned as 1.33

The change that occurs in the direction of a wave when light passes from one medium to the other is known as refraction of light.

Question 5: When is the refraction of light not possible?

When the light is incident perpendicular to the boundary or surface, refraction of light is not possible.

Question 6: Calculate the speed of light in diamond with respect to air. Take the absolute refractive index of glass from the table.

Question 7: Calculate the speed of light in glass with respect to air. Take the absolute refractive index of glass from the table.

Question 8: Calculate the speed of light in water with respect to air. Take the absolute refractive index of glass from the table.