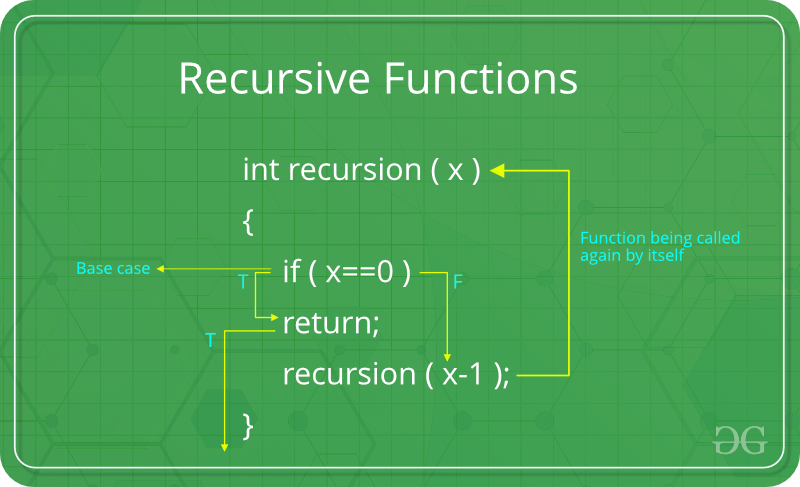 In programming terms a recursive function can be defined as a routine that calls itself directly or indirectly.

Using recursive algorithm, certain problems can be solved quite easily. Towers of Hanoi (TOH) is one such programming exercise. Try to write an iterative algorithm for TOH. Moreover, every recursive program can be written using iterative methods (Refer Data Structures by Lipschutz).

For example, a routine interview question,

In a party of N people, each person will shake her/his hand with each other person only once. On total how many hand-shakes would happen?

Solving it recursively yields an arithmetic series, which can be evaluated to N(N-1)/2.

Exercise: In a party of N couples, only one gender (either male or female) can shake hand with every one. How many shake-hands would happen?

One critical requirement of recursive functions is termination point or base case. Every recursive program must have base case to make sure that the function will terminate. Missing base case results in unexpected behaviour.

Most of us aware atleast two different ways of writing recursive programs. Given below is towers of Hanoi code. It is an example of direct calling.

The time complexity of TOH can be calculated by formulating number of moves.

We can easily solve the above recursive relation (2N-1), which is exponential.

Indirect calling. Though least pratical, a function [funA()] can call another function [funB()] which inturn calls [funA()] former function. In this case both the functions should have the base case.

We can combine defensive coding techniques with recursion for graceful functionality of application. Usually recursive programming is not allowed in safety critical applications, such as flight controls, health monitoring, etc. However, one can use a static count technique to avoid uncontrolled calls (NOT in safety critical systems, may be used in soft real time systems).

Recursion can also implemented with function pointers. An example is signal handler in POSIX complaint systems. If the handler causes to trigger same event due to which the handler being called, the function will reenter.

Thanks to Venki for writing the above post. Please write comments if you find anything incorrect, or you want to share more information about the topic discussed above.