As we know React JS is an open source JavaScript library that is used for building user interfaces specifically for single-page applications. It is also known for providing fast user experience by only updating the parts of the UI that have changed. Rendering components is not in user hands, it is a part of React Component Lifecycle and is called by React at various app stages, generally when the React Component is first instantiated. A second or subsequent render to update the state is called as re-rendering. React components automatically re-render whenever there is a change in their state or props.

A simple update of the state, from anywhere in the code, causes all the User Interface (UI) elements to be re-rendered automatically. However, there may be cases where the render() method depends on some other data. Re-render can be caused due to any of the three reasons listed:

Unnecessary re-renders affect the app performance and cause loss of users’ battery which surely no user would want. Let’s see in detail why components get re-rendered and how to prevent unwanted re-rendering to optimize app components.

Why do components get re-rendered?

Let’s have a deeper look at the three causes of re-rendering mentioned before.

React schedules a render every time state changes (scheduling a render doesn’t mean this happens immediately, this might take time and be done at the best moment). Changing a state means React triggers an update when we call the useState function (useState is a Hook that allows you to have state variables in functional components).

Example: Creating a simple Counter React Project will help to understand the concept of re-rendering components.

Prerequisite: Download VS Code and Node packages.
Step 1: Create a new React project named counter-app by running the below given command.

Step 2: Once the installation is done, you can open the project folder as shown below.

Step 3: After creating the React JS application, install the required module by running the below given command.

Step 4: Open VS Code go to the explorer in VS Code (press crtl+shift+E). Next, go to src folder->New file as shown. And name it Child.js (this is the child component). 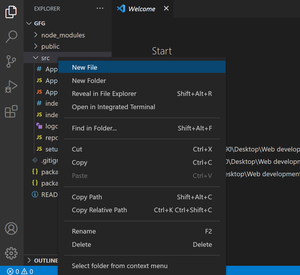 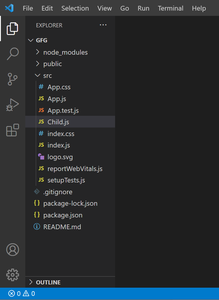 Step 5: Edit the code in the App.js file as shown.

App.js File will have the following:

The code gives a message each time the component’s render function is called. Each time the count button is clicked state change is triggered.

Step 6: Make a Child component by going on src folder->New File as shown and name it Child,js

Go to src->New File to create a new child component

Child.js will have the following:

How to prevent unwanted re-rendering of components?

If the child component is re-rendered without any change in its props then it could be prevented by using hooks. React.memo is the savior, it is a higher-order component that memorize remembers) the result i.e. React will skip rendering of that component and reuse the last rendered result. It checks for prop changes.

Example: Minor changes in the Simple Counter React project can prevent our project from unwanted re-rendering. Changes need to be done in the Child.js file as shown below.

Now the child component is not re-rendered on re-rendering of the parent component. Can be seen clearly in the console area.

Note: This method only exists as a performance optimization. Do not rely on it to prevent render, as this can lead to bugs.