RBI And Its Functions

RBI (Reserve Bank of India) is the central bank of India and a statutory body responsible for multiple tasks like printing the currency notes and acting as a custodian to other primary banks of the nation. The RBI was formed on the recommendation of the Hilton-Yong-Commission or commonly referred to as Royal Commission on Indian currency and finance in April 1934. The main motive behind setting up RBI was to separate the currency control from the government and provide other banking facilities. The working of RBI is regulated by the RBI governor appointed by the central government of India and the Governor acts as the main decision-maker in RBI. 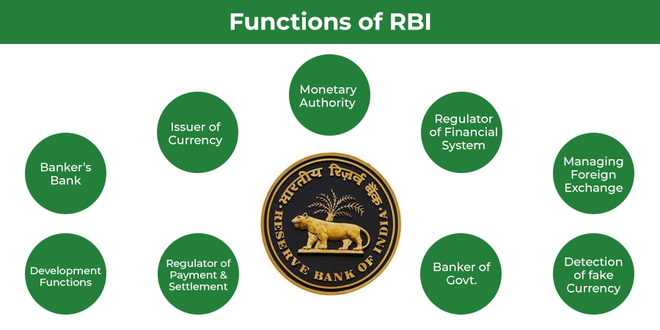 What are the Main Functions of RBI?

RBI and the Economy of India:

After the Central Government of India and the Ministry of Finance, its RBI plays the most crucial role in driving the economy of India. RBI extends its services to the other commercial banks of India and thus these banks provide banking services to the netizens. Also, RBI provides a safe and secure banking infrastructure to people living in India. The RBI tries to keep the repo rate as low as possible to ensure the proper cash flow in the market so that people invest more money in the development works. RBI jointly with the central government of India provides ease in foreign trade so that it attracts more FDI (Foreign Direct Investment).

My Personal Notes arrow_drop_up
Previous
Tertiary Sector And Its Potential
Next
Anglo-Gorkha War of Nepal and the East India Company
Recommended Articles
Page :
Potential GDP and its Determinants and Factors
21, Nov 21
What is Buffer Stock and its Impact on the Rationing System of India?
27, Sep 21
Deindustrialization in India Before 1947 and its Impact
14, Sep 21
Labour Regulations And Its Effects In India
26, Apr 22
Mining Sector In India And Its Challenges
30, Jun 22
Mid-day Meal Scheme And Its Challenges
01, Jul 22
Causes Of Rupee Falling Against US Dollar And Its Effect
29, Jul 22
Tertiary Sector And Its Potential
03, Jul 22
Toy Industry in India and its Future
04, Aug 22
Direct And Indirect Farm Subsidies And MSP
10, May 22
Difference and Relationship Between Foreign Trade and Foreign Investment
21, Feb 22
Money Laundering: Problem and Prevention
23, Mar 22
Diversification Towards Animal Husbandry, Fisheries and Horticulture
18, Oct 21
Pros and Cons of Globalization
16, Sep 21
Scope and Future of Organic Farming With Sustainable Development
27, Sep 21
Non-Farming Production Activities and Their Impact on Economy
18, Oct 21
Trade and Investment Policy Reforms Since 1991
18, Oct 21
Marginal Propensity to Consume and Save - Definition & Relation
18, Oct 21
How Health is Related to the Overall Growth and Development of India?
26, Oct 21
Microeconomics and Macroeconomics
26, Oct 21
Ex-Ante and Ex-Post Investment
21, Nov 21
Difference Between NITI Aayog and Planning Commission
26, Nov 21
Challenges For Indian Women Against Time and Space
27, Nov 21
Effect of Autonomous Change in Aggregate Demand on Income and Output
23, Dec 21
Article Contributed By :