Random waypoint model pauses time between changing its direction and/or speed. Mobile Node (MN) begins by staying in one location for certain period of time. This is widely used in indoor mobility models. We can choose random destination and speed (minimum speed or maximum speed). 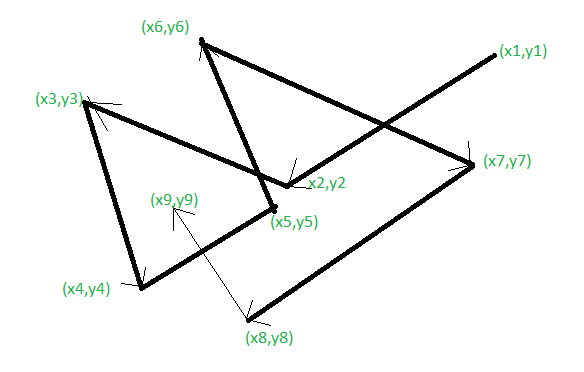 Initial point is (x1, y1). It is going in particular direction. When it reached (x2, y2), then again it has to change its direction because angle from initial point to (x2, y2) and then from (x2, y2) to (x3, y3) is different. Speed can also differ. We can say that firstly it was moving at 10 m/sec and at second angle it was going at 5 m/sec. So, for particular period of time i.e pause time, say x m/sec. It will stop for that time and then will resume for further process. This is how it works until final destination arrives i.e, (x9, y9).
MN’s are distributed randomly around simulation area. Also, neighbor MN’s are within transmission range. High variability in neighbor percentage affects performance.

From the above given diagram, let each arrow be called node and whole is known as in under simulation area. The data is distributed in area. It’s obvious that we can transmit data from (x7, y7) to (x8, y8) but not to (x5, y5) because of transmission ranges from one point to another. When we are moving in wave-point then randomly, distance can be changed too. So, it is also possible that after some point of time (x5, y5) comes close to point (x7, y7).

So, though every node is distributed but because of its variability, there is high percentage of performance loss.