In a cricket match, before the game begins. Two captains go for a toss. Tossing is an activity of flipping a coin and checking the result as either “Head” or “Tail”. Similarly, tossing a die gives us a number from 1 to 6. All these activities are examples of experiments. An activity that gives us a result is called an experiment. There are can be more than one outcome of an experiment. The field of probability is more concerned with random experiments. These experiments do not have a definite outcome, that is you cannot predict the outcome of these experiments with absolute certainty.

Probability theory is based on experiments. An experiment is a test, trial, or procedure for the purpose of discovering something unknown, testing a principle or supposition, etc. Following is the list of some activities that can be considered as experiments:

All the activities listed above can be described as experiments. Notice that in activity 1 and activity 2 we do not know the result of the activity and cannot say with certainty what number will appear on-die or whether we will get a head or tails with the coin toss. The result of activity 3 can be predicted easily. This means that there is randomness involved in experiment-1 and 2. Such experiments are called random experiments.

A random experiment is defined as an experiment whose outcome cannot be predicted with certainty.

To illustrate this concept, let’s take this experiment as an example.

The figure below represents the outcomes in form of a tree. 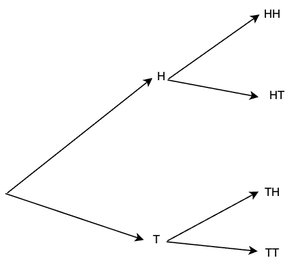 When an experiment is repeated several times, each one of them is called a trial. Thus, a trial can be described as a particular performance of a random experiment. In this particular experiment, a trial is the tossing of the coin. Two such trials constitute the whole experiment.

For an experiment with sample space S, the goal is to assign probabilities to certain outcomes. To understand the concept of events, let’s consider an experiment again. Two dice are rolled, we are interested in the outcomes where the sum of the numbers of dice is equal to 6. The first step is to consider the sample space for this experiment.

These are all the possible outcomes of this experiment.

An event is the subset of the sample space.

Let’s look at some examples on these concepts.

Question 1: Write the sample space for three tosses of a coin.

Outcome of three coin tosses will be triplets of Heads and Tails. 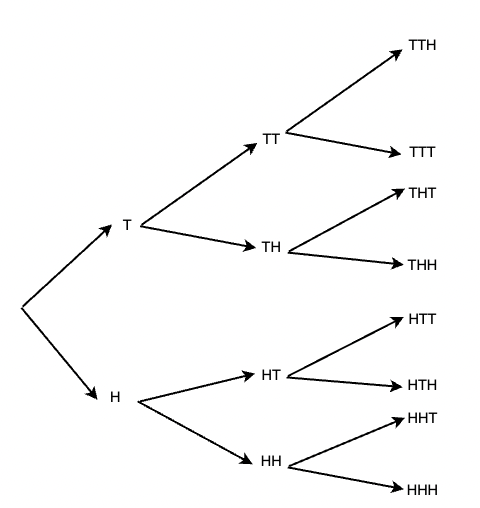 Question 2: Out of the following activities given below. Choose random activities:

Each random experiment/activity must fulfill the following two conditions:

Drawing a ball from an urn containing black and white balls.

This can be repeated as many times as required, and also it cannot be predicted which ball will be drawn. Thus is a random activity.

Multiplying 4 and 8 on the calculator.

Birth of a person

Birth of a person cannot be repeated. So, it is not a random activity.

Question 3: Consider an experiment of rolling a die and then tossing a coin. Draw the sample space. 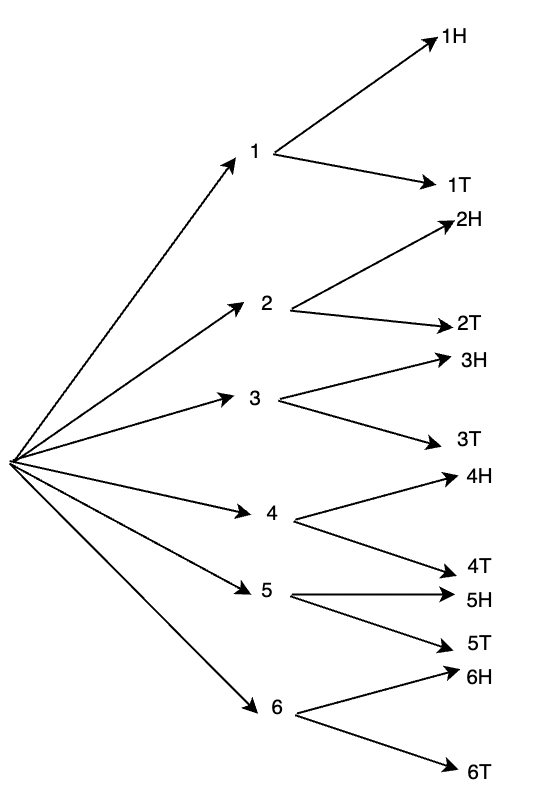 Question 4: Find the probability of getting 2 heads in three tosses of a coin.

Counting the number of favorable outcomes, there are three outcomes with two heads.

Question 5: Find the probability of drawing out an ace from a well-shuffled deck of cards.

A deck of cards contains 52 cards and out of which 4 are aces. The formula for probability,

Question 6: Find the probability of getting at least 1 head in three tosses of a coin.

Counting the number of favorable outcomes, there are seven outcomes with atleast one head.