Since Convolution Neural Network (CNN) with a fully connected layer is not able to deal with the frequency of occurrence and multi objects. So, one way could be that we use a sliding window brute force search to select a region and apply the CNN model on that, but the problem of this approach is that the same object can be represented in an image with different sizes and different aspect ratio. While considering these factors we have a lot of region proposals and if we apply deep learning (CNN) on all those regions that would computationally very expensive.

Region Proposals:
Region proposals are simply the smaller regions of the image that possibly contains the objects we are searching for in the input image. To reduce the region proposals in the R-CNN uses a greedy algorithm called selective search.

In Step 2 similarities are considered based on colour similarity, texture similarity, region size, etc. We have discussed the selective search algorithm in great detail in this article.

CNN architecture of R-CNN :
After that these regions are warped into the single square of regions of dimension as required by the CNN model. The CNN model that we used here is a pre-trained AlexNet model, which is the state of the art CNN model at that time for image classification Let’s look at AlexNet architecture here.

Here the input of AlexNet is (227, 227, 3). So, if the region proposals are small and large then we need to resize that region proposal to given dimensions.

From the above architecture, we remove the last softmax layer to get (1, 4096) feature vector. We pass this feature vector into SVM and bounding box regressor.

SVM (Support Vector Machine):
The feature vector generated by CNN is then consumed by the binary SVM which is trained on each class independently. This SVM model takes feature vector generated in previous CNN architecture and outputs a confidence score of the presence of an object in that region. However, there is an issue for training with SVM is that we required AlexNet feature vectors for training SVM class. So, we could not train AlexNet and SVM independently in paralleled manner. This challenge is resolved in future versions of R-CNN (Fast R-CNN, Faster R-CNN etc.).

Bounding Box Regressor:
In order to precisely locate the bounding box in the image., we used a scale-invariant linear regression model called bounding box regressor. For training this model we take as predicted and Ground truth pairs of four dimensions of localization. These dimensions are (x, y, w, h) where x and y are the pixel coordinates of center of bounding box respectively. w and h represents the width and height of bounding boxes. This method increases Mean Average precision (mAP) of the result by 3-4%. 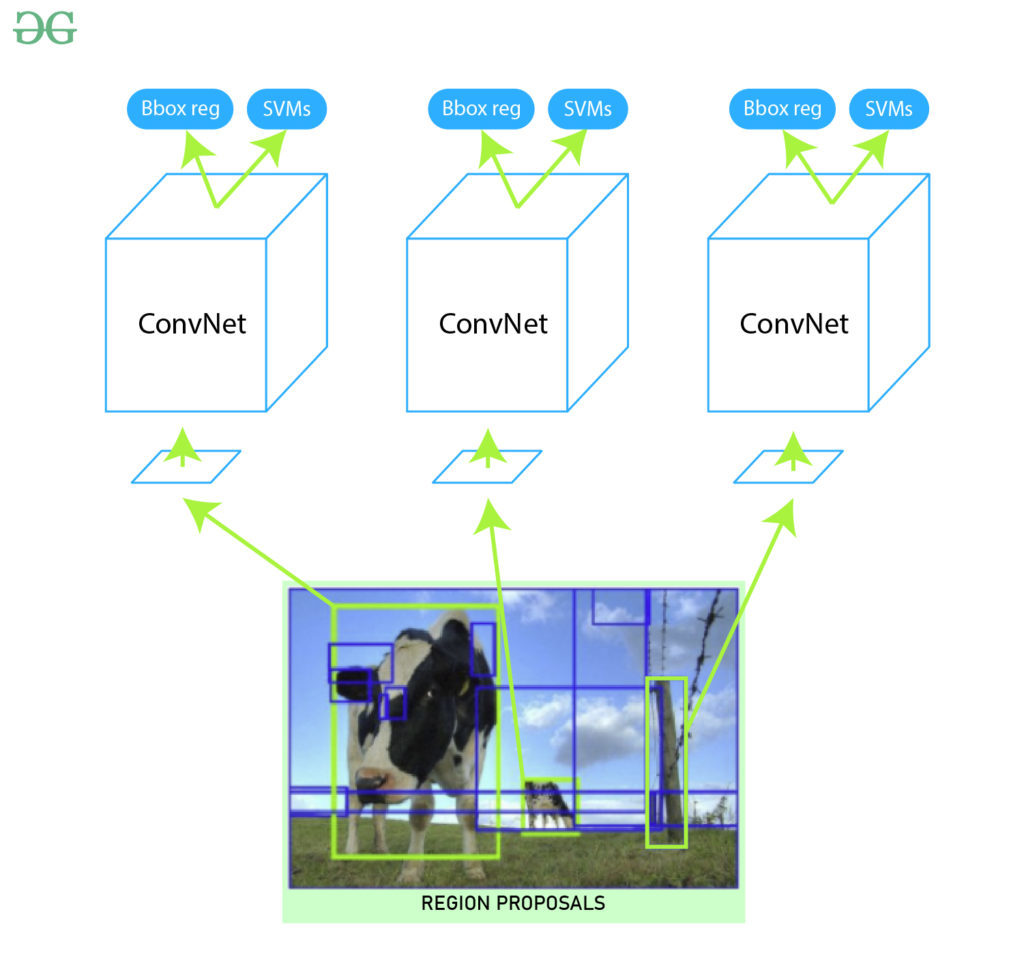 Output:
Now we have region proposals that are classified for every class label. In order to deal with the extra bounding box generated by the above model into the image, we use an algorithm called Non- maximum suppression.
It works in 3 steps:

After that we can obtain output by plotting these bounding boxes on input image and labeling objects that are present in bounding boxes.
Results:
The R-CNN gives Mean Average Precision (mAPs) of 53.7% on VOC 2010 dataset. On 200-class ILSVRC 2013 object detection dataset it gives mAP of 31.4% which is large improvement from previous best 24.3%. However, this architecture is very slow to train and takes ~ 49 sec to generate test results on a single image of VOC 2007 dataset.