Like Merge Sort, QuickSort is a Divide and Conquer algorithm. It picks an element as a pivot and partitions the given array around the picked pivot. There are many different versions of quickSort that pick pivot in different ways.

The key process in quickSort is a partition(). The target of partitions is, given an array and an element x of an array as the pivot, put x at its correct position in a sorted array and put all smaller elements (smaller than x) before x, and put all greater elements (greater than x) after x. All this should be done in linear time.

There can be many ways to do partition, following pseudo-code adopts the method given in the CLRS book. The logic is simple, we start from the leftmost element and keep track of the index of smaller (or equal to) elements as i. While traversing, if we find a smaller element, we swap the current element with arr[i]. Otherwise, we ignore the current element.

/* pi is partitioning index, arr[pi] is now at right place */

/* This function takes last element as pivot, places the pivot element at its correct position in sorted array, and places all smaller (smaller than pivot) to left of pivot and all greater elements to right of pivot */ 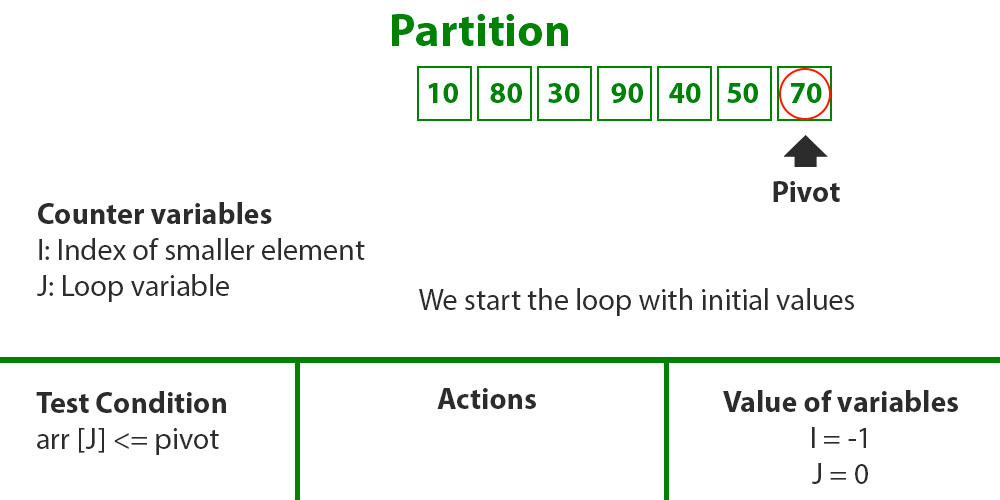 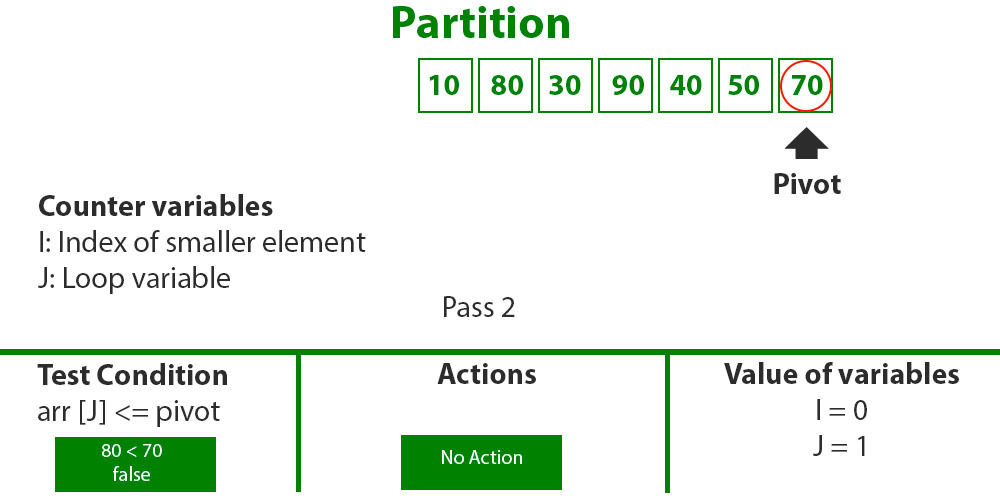 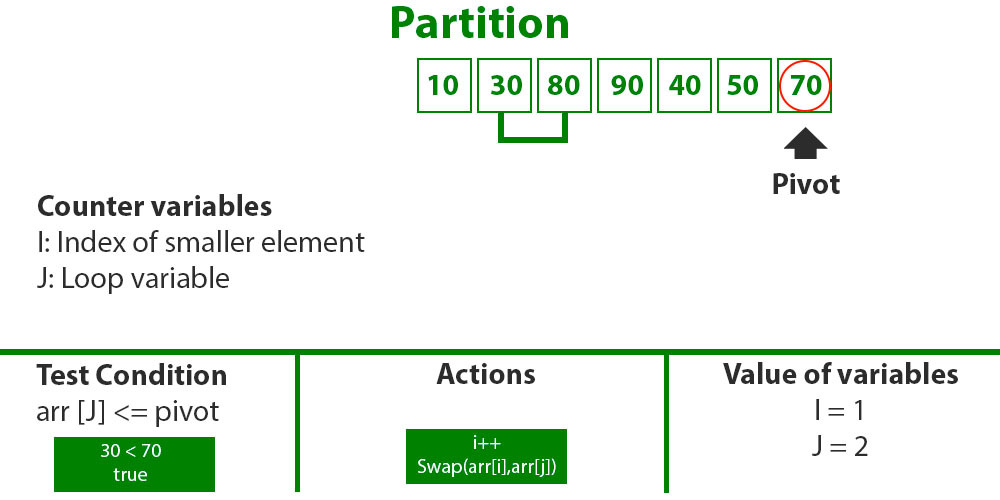 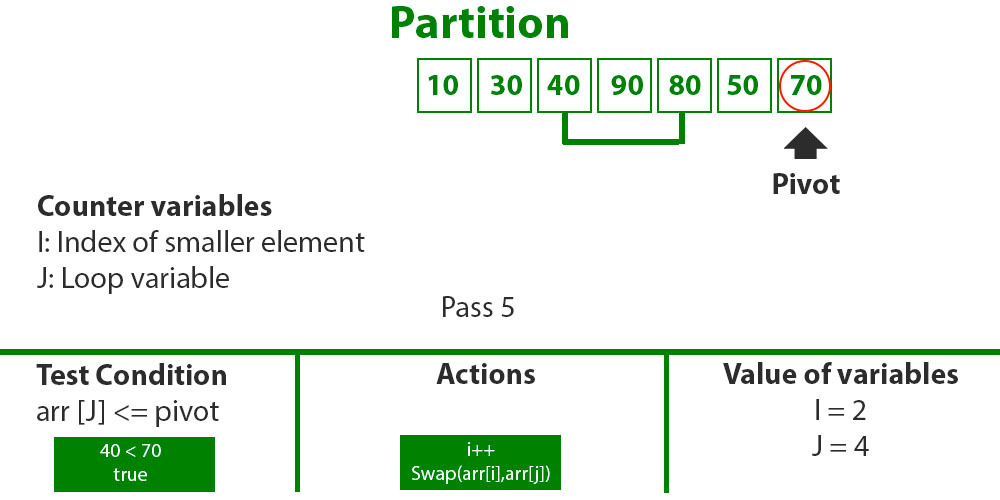 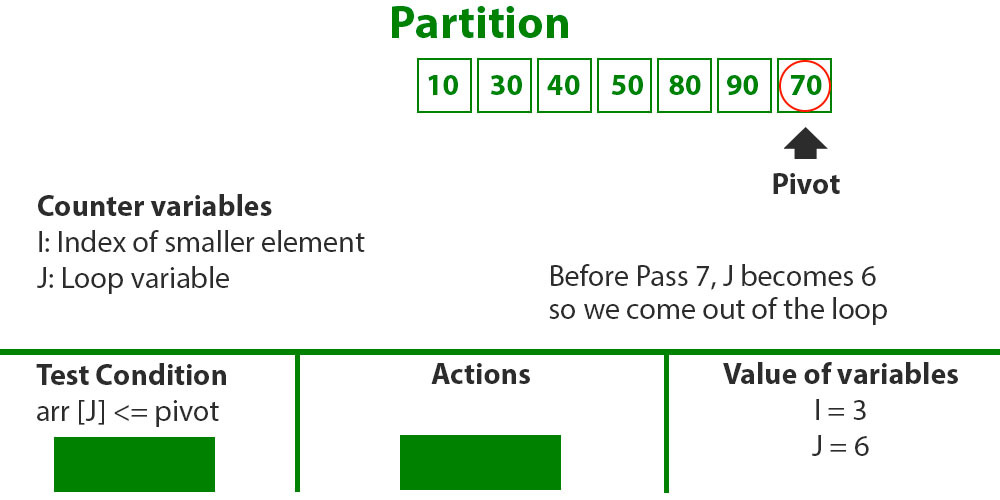 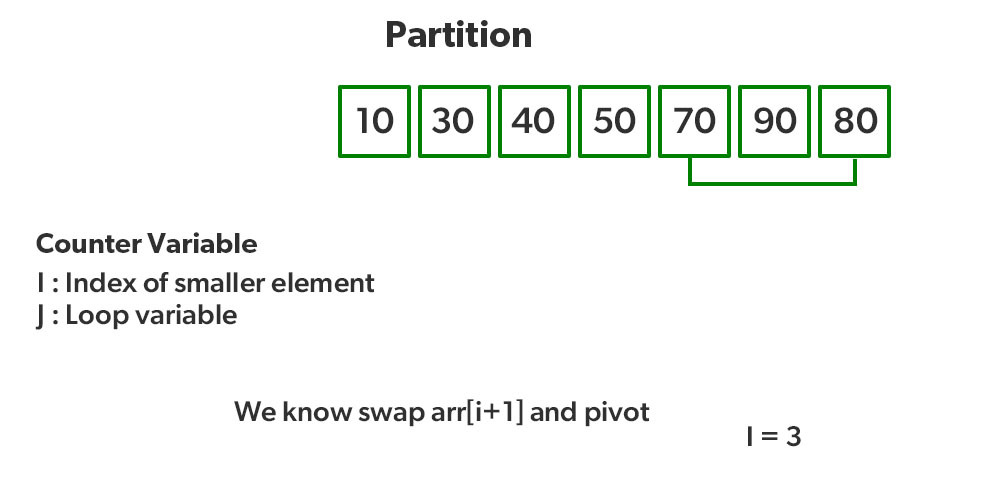 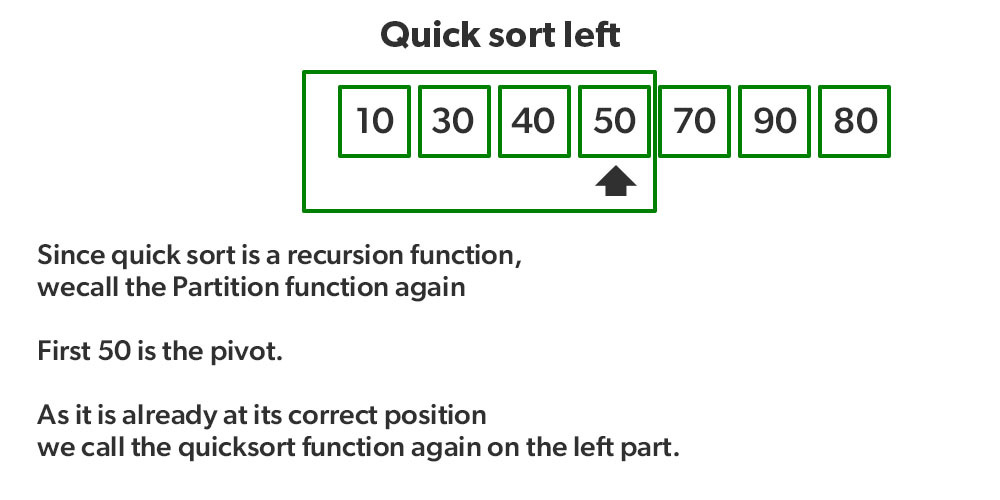 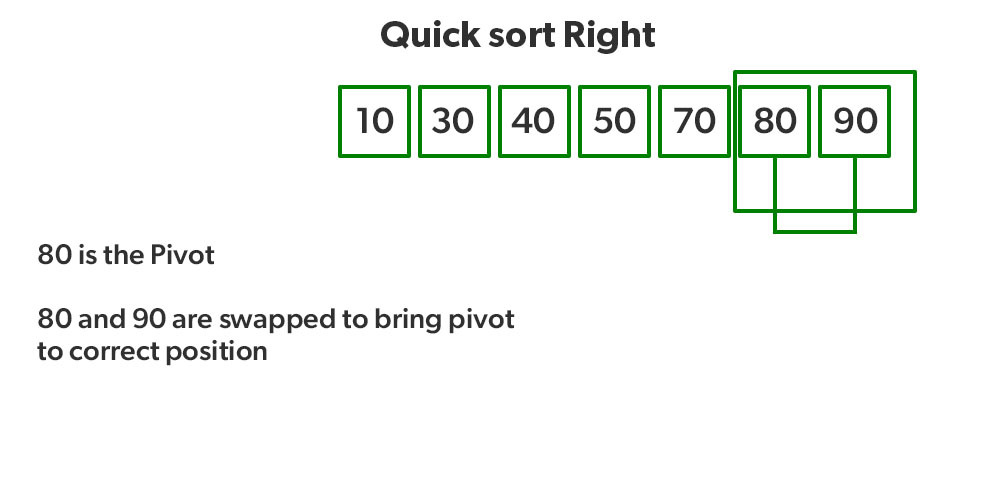 Please note that the above implementation is Lomuto Partition. A more optimized implementation of QuickSort is Hoare’s partition which is more efficient than Lomuto’s partition scheme because it does three times less swaps on average.

How to pick any element as pivot?

Time taken by QuickSort, in general, can be written as follows.

The first two terms are for two recursive calls, the last term is for the partition process. k is the number of elements that are smaller than the pivot.
The time taken by QuickSort depends upon the input array and partition strategy. Following are three cases.

The solution to the above recurrence is

Best Case:
The best case occurs when the partition process always picks the middle element as the pivot. The following is recurrence for the best case.

The solution for the above recurrence is

The solution of above recurrence is also O(nLogn):

Although the worst case time complexity of QuickSort is O(n2) which is more than many other sorting algorithms like Merge Sort and Heap Sort, QuickSort is faster in practice, because its inner loop can be efficiently implemented on most architectures, and in most real-world data. QuickSort can be implemented in different ways by changing the choice of pivot, so that the worst case rarely occurs for a given type of data. However, merge sort is generally considered better when data is huge and stored in external storage.

The default implementation is not stable. However any sorting algorithm can be made stable by considering indexes as comparison parameter.

As per the broad definition of in-place algorithm it qualifies as an in-place sorting algorithm as it uses extra space only for storing recursive function calls but not for manipulating the input.

What is 3-Way QuickSort?

See this for implementation.

How to implement QuickSort for Linked Lists?

Can we implement QuickSort Iteratively?

Why Quick Sort is preferred over MergeSort for sorting Arrays ?

Quick Sort in its general form is an in-place sort (i.e. it doesn’t require any extra storage) whereas merge sort requires O(N) extra storage, N denoting the array size which may be quite expensive. Allocating and de-allocating the extra space used for merge sort increases the running time of the algorithm. Comparing average complexity we find that both type of sorts have O(NlogN) average complexity but the constants differ. For arrays, merge sort loses due to the use of extra O(N) storage space.
Most practical implementations of Quick Sort use randomized version. The randomized version has expected time complexity of O(nLogn). The worst case is possible in randomized version also, but worst case doesn’t occur for a particular pattern (like sorted array) and randomized Quick Sort works well in practice.
Quick Sort is also a cache friendly sorting algorithm as it has good locality of reference when used for arrays.
Quick Sort is also tail recursive, therefore tail call optimizations is done.

Why MergeSort is preferred over QuickSort for Linked Lists ?

In case of linked lists the case is different mainly due to difference in memory allocation of arrays and linked lists. Unlike arrays, linked list nodes may not be adjacent in memory. Unlike array, in linked list, we can insert items in the middle in O(1) extra space and O(1) time. Therefore merge operation of merge sort can be implemented without extra space for linked lists.
In arrays, we can do random access as elements are continuous in memory. Let us say we have an integer (4-byte) array A and let the address of A[0] be x then to access A[i], we can directly access the memory at (x + i*4). Unlike arrays, we can not do random access in linked list. Quick Sort requires a lot of this kind of access. In linked list to access i’th index, we have to travel each and every node from the head to i’th node as we don’t have continuous block of memory. Therefore, the overhead increases for quick sort. Merge sort accesses data sequentially and the need of random access is low.

How to optimize QuickSort so that it takes O(Log n) extra space in worst case?