The Queue interface present in the java.util package and extends the Collection interface is used to hold the elements about to be processed in FIFO(First In First Out) order. It is an ordered list of objects with its use limited to insert elements at the end of the list and deleting elements from the start of the list, (i.e.), it follows the FIFO or the First-In-First-Out principle. 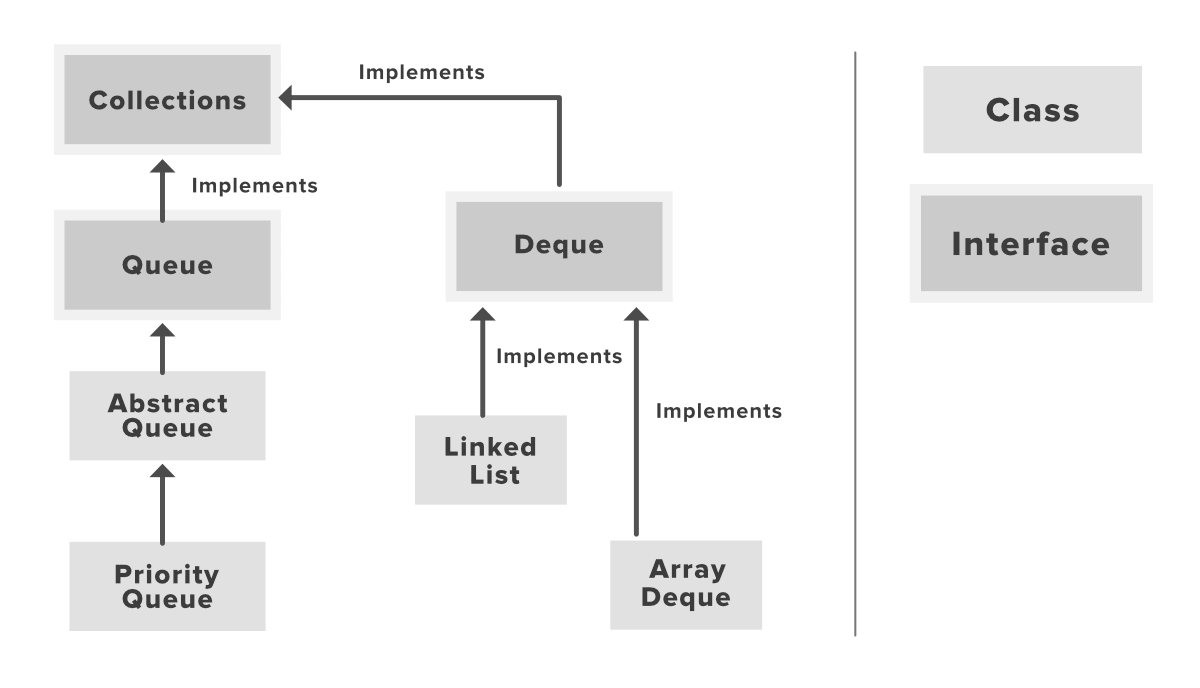 Declaration: The Queue interface is declared as:

Since Queue is an interface, objects cannot be created of the type queue. We always need a class which extends this list in order to create an object. And also, after the introduction of Generics in Java 1.5, it is possible to restrict the type of object that can be stored in the Queue. This type-safe queue can be defined as:

// Obj is the type of the object to be stored in Queue
Queue<Obj> queue = new PriorityQueue<Obj> ();

Example of a Queue:

Let’s see how to perform a few frequently used operations on the queue using the Priority Queue class.

1. Adding Elements: In order to add an element in a queue, we can use the add() method. The insertion order is not retained in the PriorityQueue. The elements are stored based on the priority order which is ascending by default.

2. Removing Elements: In order to remove an element from a queue, we can use the remove() method. If there are multiple such objects, then the first occurrence of the object is removed. Apart from that, poll() method is also used to remove the head and return it.

Classes which implement the Queue Interface:

1. PriorityQueue: PriorityQueue class which is implemented in the collection framework provides us a way to process the objects based on the priority. It is known that a queue follows First-In-First-Out algorithm, but sometimes the elements of the queue are needed to be processed according to the priority, that’s when the PriorityQueue comes into play. Let’s see how to create a queue object using this class.

2. LinkedList: LinkedList is a class which is implemented in the collection framework which inherently implements the linked list data structure. It is a linear data structure where the elements are not stored in contiguous locations and every element is a separate object with a data part and address part. The elements are linked using pointers and addresses. Each element is known as a node. Due to the dynamicity and ease of insertions and deletions, they are preferred over the arrays or queues. Let’s see how to create a queue object using this class.

Since it is unbounded, adding elements may sometimes fail due to resource exhaustion resulting in OutOfMemoryError. Let’s see how to create a queue object using this class.

The queue interface inherits all the methods present in the collections interface while implementing the following methods: