Similar to a bit in classical computing, a qubit is a basic building block of Quantum Computers. It represents the superposition of states 0 and 1. What we mean by superposition is that the given state is in a linear combination of state 0 and state 1.

It is a common misconception that qubit is in one state 0 or 1, we just don’t know until we measure it. However, qubit always exists in a state between 0 and 1 (inclusive), the act of measuring brings it to either of the states.

State 0 is represented as :

State 1 is represented as:

Dirac’s Notation :
It is a shorthand notation for a qubit. A vector is represented using a ket.

It also has a dual form written as:

Hence, any arbitrary state can be represented as:

Some other symbols used are:

|+> and |-> are called Hadamard’s basis. These are also orthogonal to each other. 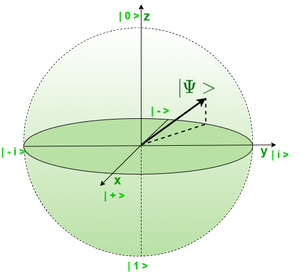