Python sys module provides some of the powerful functions but they are complex to understand. One of which is the sys.settrace() which is used for implementing debuggers, profilers and coverage tools. This is thread-specific and must register the trace using threading.settrace().

Knowing how the function works internally is really important in case you are planning to create your own debugger.

On a higher level, sys.settrace() registers the traceback to the Python interpreter. A traceback is basically the information that is returned when an event happens in the code. You might have seen traceback when your code has some error or an exception is raised.

The registered traceback is invoked when one of the following four events occur :

Parameters:
frame: frame is the current stack frame
event: A string which be either 'call', 'line', 'return', 'exception' or 'opcode'
arg: Depends on the event type

Returns: Reference to the local trace function which then returns reference to itself.

Let’s create our own local trace function with line, function and call events. These events are highlighted in the below given code.

You might be wondering why does the local function my_code returns itself?
The reason is hidden in the functioning of sys.settrace(). What sys.settrace does is that it first registers a global trace which is called whenever a frame is created which returns our local trace function my_trace whenever any one of the above mentioned event occurs. For better understanding look at the image shown below: 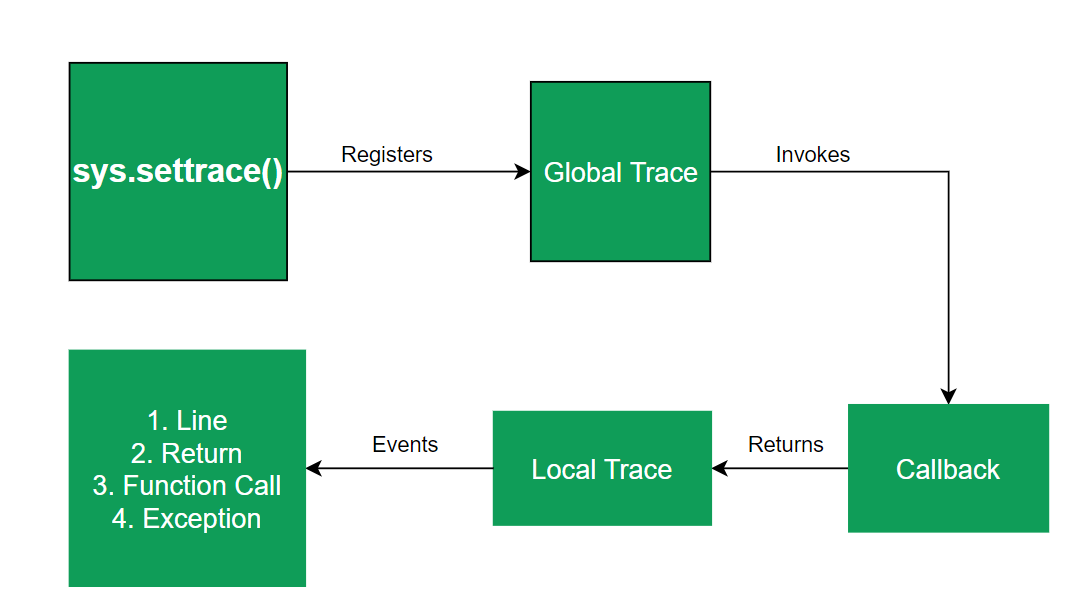 If we don’t want our scope to be traced then None should be returned but if that is not the case we might want to do the same with our local trace function then it should return None else if there is an error then settrace(None) is automatically called.

Note : There is a function named gettrace available in sys module to get the trace set by sys.settrace()