The Contingency Table :
A Contingency table (also called crosstab) is used in statistics to summarise the relationship between several categorical variables. Here, we take a table that shows the number of men and women buying different types of pets.

The aim of the test is to conclude whether the two variables( gender and choice of pet ) are related to each other.

We can verify the hypothesis by these methods:

Next, we prepare a similar table of calculated(or expected) values. To do this we need to calculate each item in the new table as :

We prepare this table by calculating for each item the following:

Now, let us look at the table and find the value corresponding to 2 degrees of freedom and 0.05 significance factor : 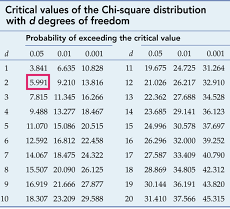 The tabular or critical value of chi-square here is  5.991

Therefore, H0 is accepted, that is, the variables do not have a significant relation.

Next, let us see how to perform the test in Python.

SciPy is an Open Source Python library, which is used in mathematics, engineering, scientific and technical computing.

The chi2_contingency() function of scipy.stats module takes as input, the contingency table in 2d array format. It returns a tuple containing test statistics, the p-value, degrees of freedom and expected table(the one we created from the calculated values) in that order.

Hence, we need to compare the obtained p-value with alpha value of 0.05.

Therefore, we accept H0, that is, the variables do not have a significant relation.